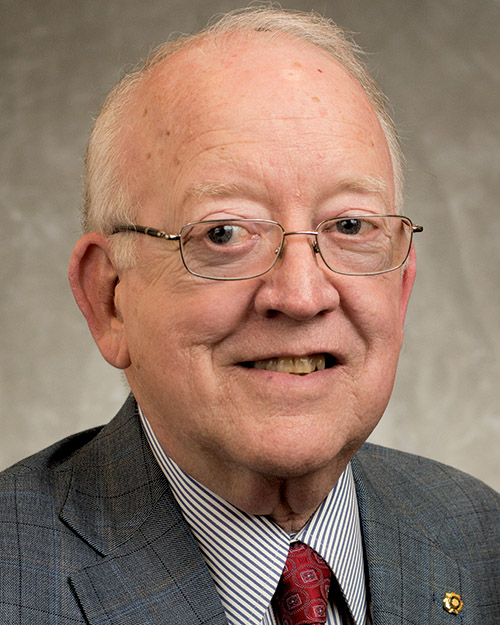 When you first meet a person, you form an impression. Dr. Lewis “Tony” Finley made an impression on me the first time I met him as my new boss at Harding University 22 years ago.

It’s interesting what you remember about a person, but several things come to mind when I think of Tony Finley. He loved his family very much. As he shared stories about family get-togethers, trips and dinners, he never gave a vague recounting of these times; he always provided colorful details sprinkled with a generous amount of devotion and pride. I had no doubt he loved his family.

Tony was meticulous if nothing else. He was a detail man with a remarkable memory. I was always amazed by his ability to recall details and names from events early in his life and throughout. He shared about his experiences as a young boy growing up in southwest Arkansas. As a teenager, he began his lifelong love of cars and traded them often. In the last few years of his life, he enjoyed restoring a Model A. In a conversation we had shortly after he began this project, he assured me he wasn’t going to spend too much time and money on it, but I knew better! He couldn’t help but go after it with his characteristic gusto and attention to detail. He loved every minute of the nitty gritty of taking the car apart, ordering materials, redoing and replacing parts, and he shared it all with delight in the details. He was a detail man.

When I joined the College of Education faculty in 1998, Tony Finley was my dean, and he was already known and respected around the state and beyond for his leadership, vision and work in science, technology, engineering and mathematics education. He continued this passion until he retired in 2016. Shortly thereafter the center on campus was renamed the Lewis “Tony” Finley STEM Center, and much of the work he began with grants and initiatives in the state continues to influence teachers and aspiring STEM students.

Anyone who knew Tony knew his love for travel. He and I would often sit in his office, and he would recount trips from as close as a fossil dig in northern Arkansas to the far reaches of the interior of Russia. For a number of years, he led teachers around the country on professional development trips to learn about the geography, history and science of almost every state.

I suppose the most remarkable characteristic of Tony Finley was his tenacity and sheer determination. As a teenager, he was a talented baseball player and eyed playing professionally until a mechanical accident ripped his left arm off when he was 16. He described this experience as a turning point in his life that put him on a trajectory he otherwise wouldn’t have followed. He expressed it this way in a commencement speech several years ago: “For me, that accident in 1960 was traumatic and frightening, but it pushed me to a place I otherwise might not have journeyed.”

From his travels, Tony was intrigued with the lighthouses he often visited. He shared his interest in these iconic structures and how they would provide light to show the way. Perhaps that is what Tony did best — he provided light to show the way for educators around the state and for those he influenced in his role as teacher, principal, superintendent and eventually dean.

I learned a lot from Tony Finley as I worked alongside him for nearly 20 years. He asked me to serve as his associate dean and placed confidence in my abilities. He, as much as anyone, has helped shape me professionally and personally and provided me the opportunity to do the same for others. I am grateful for that.

—Donny Lee, dean of the Cannon-Clary College of Education

Lewis Francis “Tony” Finley (‘80), 75, of Searcy died April 2, 2019. He received his master’s from Southeast Missouri State College and a doctorate of education from University of Arkansas. In his 52 years as an educator, he taught chemistry and math, coached boys basketball, girls volleyball, and served as principal and superintendent. He taught in public schools in Missouri and Arkansas, and for 38 years he was employed at Harding Academy and Harding University where he served as dean of the College of Education for 17 years. In 1987 he established the STEM center in the College of Education. He also was owner of a department and athletic supply store and a home building contractor in Searcy for 22 years. He served the Lord’s church in many capacities including classroom teacher, education director, VBS director, Joy Bus Program director, deacon, elder and pulpit minister. As a foster parent himself, he worked with Children’s Home of Paragould in the placement of foster children. He was a member of College Church of Christ. He was preceded in death by a brother, Ron. He is survived by his wife of 58 years, Bettye Sue Lovern; two children, Tonita Hickey (’87) and Scott (’86); a brother, Rodney (’78); four grandchildren; and three great-grandchildren.

Life in the COVID-19 hall