Out of this world: Harding’s contribution to landing a man on the moon 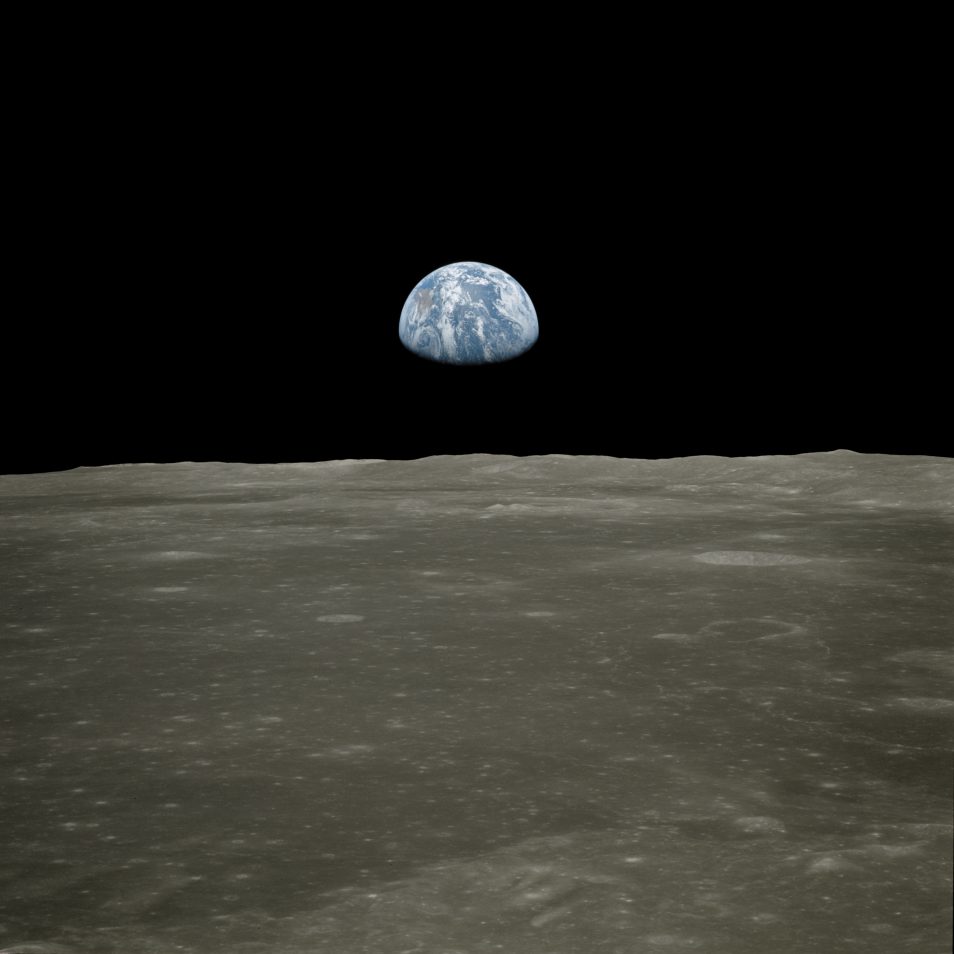 By Ed Wilson, professor emeritus of chemistry and biochemistry

There have been many great explorations during the course of history: Siberians crossing the Bering Land Bridge to settle the Americas, Abraham’s trek to the Promised Land, Marco Polo’s trip to China, Magellan’s great voyage around the world, Columbus’ discovery of the New World, David Livingstone’s trek to the head waters of the Nile, Lewis and Clark’s search for the Northwest Passage and Roald Amundsen’s venture to the South Pole. There are many tales of amazing travels to be told, but I think all of us would agree that landing a man on the moon is a historic event like no other.

It is a matter of pride for me to know that Harding University contributed in a significant way, as did many, many people, toward meeting the goal of placing a man on the moon. Few people know about the connection between what was then Harding College and NASA and how research done by University faculty and students helped to meet that goal.

Preparation for this important venture at Harding College began long before May 25, 1961, when President Kennedy announced, “… We choose to go to the moon in this decade and do the other things, not because they are easy, but because they are hard …”

The proposal to NASA

In 1966, the University had just completed a research grant that funded physical fitness tests for children. Three University faculty members, Vice President of Research R.T. Clark (’39), Director of Testing Bob Corbin, and Chair of the Department of Health, Physical Education and Recreation Harry Olree (’53), submitted a proposal to NASA for Harding to evaluate astronauts in preparation for space flights. NASA responded to the proposal and promised to let them know of their decision whether to fund. While the team was waiting for direction, tragedy struck.

In July of 1966, Clark was running with some of the cross-country team north of Searcy and collapsed. He was rushed to the hospital where he died from a heart attack. This placed the research program in a dire situation. The Harding program that was developing so well instantaneously had no leader and no plans. At the time, the research team consisted of Olree as director of research, Director of Biochemistry Carroll Smith, and Corbin. The team called a contact at NASA Houston Space Center to inquire about the status of the proposal and eventually secured funding beginning fall 1967.

The initial grant was for two years and detailed four experiments to be done. At the end of the two-year grant, NASA asked Harding to continue the research for another year. This lasted for an additional 10 years until 1979 when NASA changed its emphasis from long-term flights for astronauts to requirements needed for the shorter duration flights of the space shuttle. 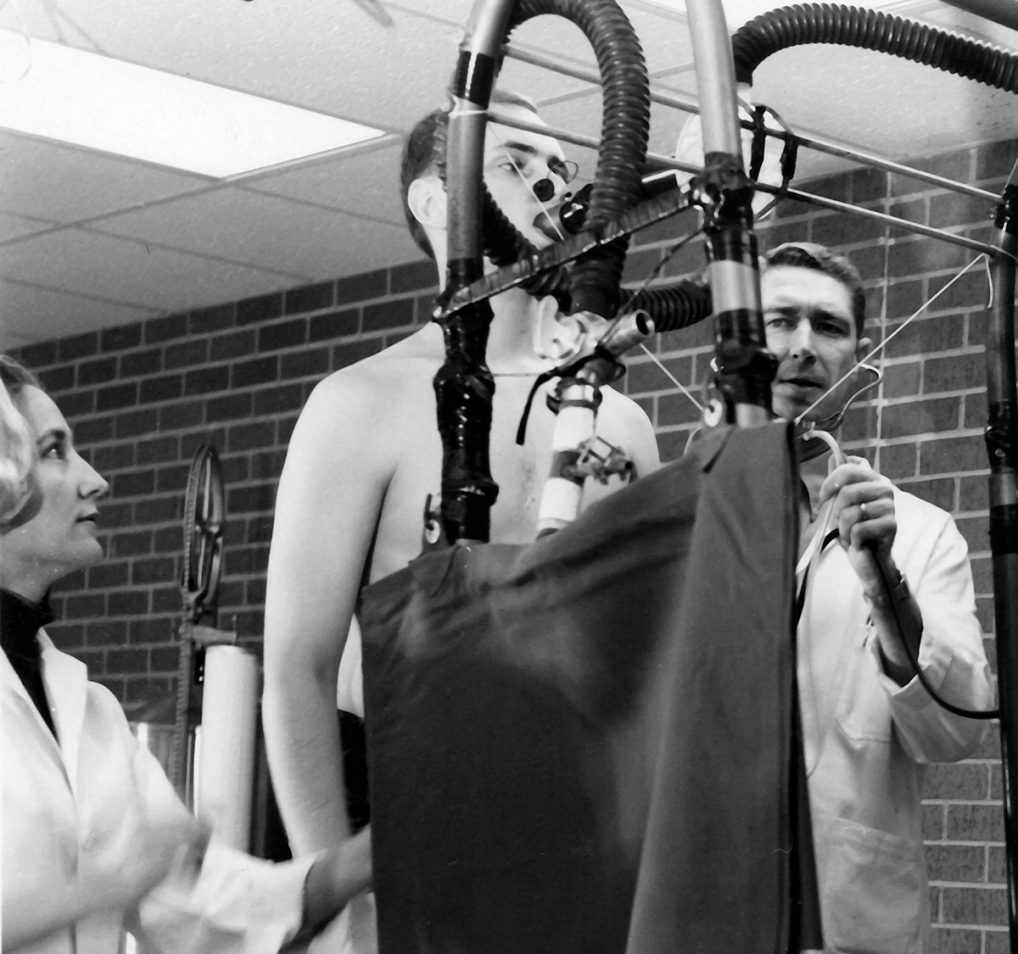 Because of his previous research with Dr. R.T. Clark in space medicine at the Federal Aviation Agency, Bob Corbin came to Harding in 1964 to work with Harding’s research team.

Harding College had built a new science building, which opened in 1967. When the new building was dedicated, the research wing was named the Robert T. Clark Research Center. The new facility had a special room in which not only the temperature could be controlled but also humidity and pressure. Human subjects could be studied under different conditions that might be encountered on a space mission. There was a complete blood laboratory for use when testing the subjects involved in the NASA studies. This also was used to find if there was a simple blood test that could determine a person’s fitness level. Another device known as “The Tank” consisted of a set of scales large enough to seat a human being and obtain their weight before and after complete submersion in a large tank of water in order to estimate their body fat. Ancillary equipment for this measurement was used to estimate the volume of the lungs so that a correction could be applied to the measurements for the empty space in the lungs.

Later on, a special mass spectrometer was added to measure lung gases being expelled while exercising on the treadmill. All kinds of exercise machines were in the laboratory — mainly bicycles and resistance machines.

The majority of the research was done on subjects using a special treadmill. It was huge, weighing more than a ton, with large motors to precisely move the tread at specific angles and speeds. The method used was originally known as the Balke Treadmill Test. This test measured the consumption of oxygen by the body for one minute while the subject’s heart rate had been increased to 180 beats per minute. The researchers realized that if you measured the oxygen uptake in milliliters per minute and then divided by the human subject’s mass, the data suddenly made sense.

The Harding research team carried out 28 experiments during the 12 years of operation. Each experiment had 20 volunteers, and the team was told to focus on the effects of long-term space flights for the Apollo and Skylab programs. The Harding studies were an extension of the work at Johnson Space Flight Center’s Physiology Laboratory. The research team of Olree, Corbin and Smith worked closely with some of the astronauts on various projects. The astronaut everyone remembers is Dr. Story Musgrave. Corbin said that he could always tell when Story was coming to Searcy because he could hear the putter-putt-putt of the engine of his vintage plane coming over the campus on its way to the airfield. Musgrave has spent more time in space than almost any astronaut, been on numerous missions, and was a key player in the repair of the Hubble Telescope.

“My adventures at Harding College create a smile today even though they took place almost 50 years ago. Folks from the Physiology Laboratory at Harding and myself explored what was known about the physiological effects of spaceflight — in particular those attributable to the free fall or zero-g environment,” Musgrave said. “Back then, NASA wanted no changes at all, but we went beyond that to explore all the possible outcomes and how we might affect them with a variety of physical inflight exercise devices that we imagined. It was a wonderful opportunity to, as they say, get out of the box and explore the possibilities for the consequences of short- and long-term human spaceflight and how to manage them. For that rare opportunity, I shall be forever appreciative.” 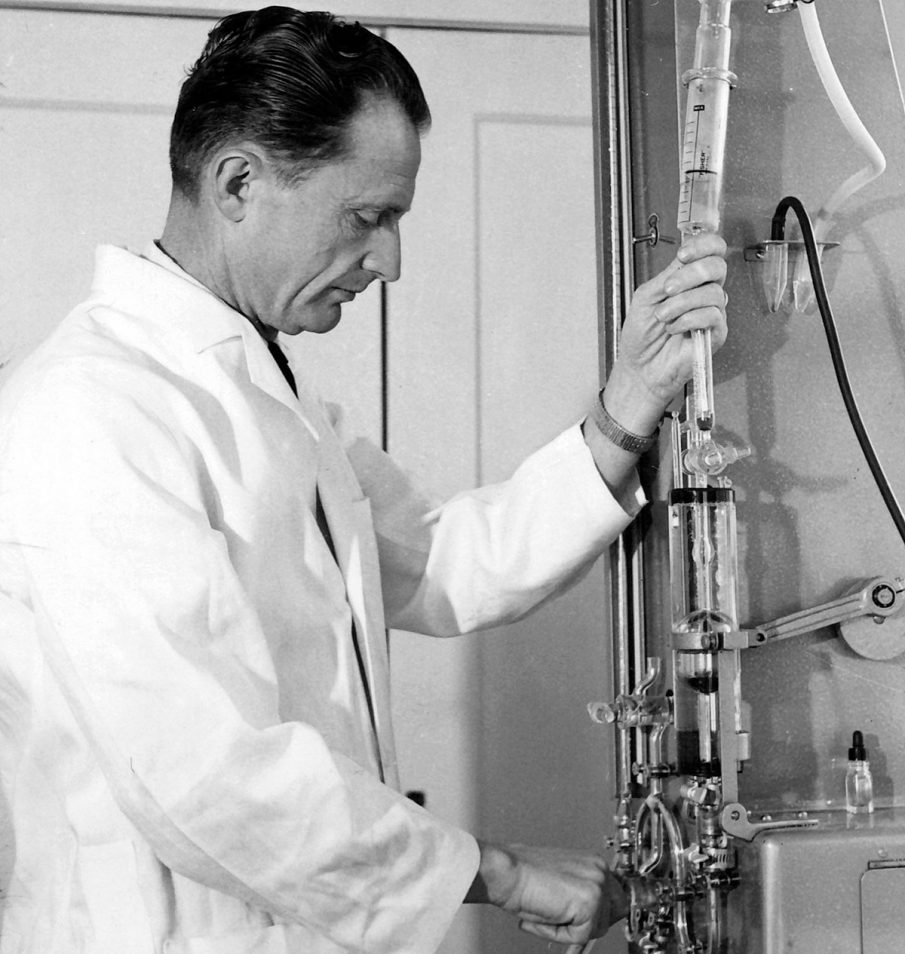 1939 graduate Dr. R.T. Clark returned in 1962 following research and professional experience in the Navy Reserve, the U.S. Air Force School of Aviation Medicine, and the Federal Aviation Agency, among other prominent positions.

The first report from Harding College was titled “Methods for Achieving and Maintaining Physical Fitness for Prolonged Space Flight,” and those first experiments were baseline experiments to determine how to evaluate and attain physical fitness. They compared exercise by bicycle and running, carrying out exercise at different heart rates (140, 160 and 180), training different amounts of time (20, 40 and 60 minutes), training more or less often (3, 6 or 12 times a week), and finally training to near exhaustion — fitter than normal training. Another interesting study was about deconditioning, and Corbin stated that it takes about six weeks to get into good condition and about six weeks to lose it.

Some of the other studies made findings using other types of exercise devices. One study was “Effects of Bed Rest, Sleep Deprivation and Discontinuance of Training on the Physical Fitness of Highly Trained Young Men.” The model for zero gravitation studies was total bed rest, and some Harding students spent a month in bed for the studies in order to learn more about the effects of long-term space missions on the human body.

When the women’s rights movement began to take effect, NASA followed suit with research on the “Study of Optimal Training Protocols and Devices for Developing and Maintaining Physical Fitness in Females Prior to and During Space Flight.” This was probably one of the first times that research was done on female subjects in physical fitness.

At the end of this period in 1977, work at Harding ceased on the project. NASA was more focused on short-term space missions, like the space shuttle. The Harding researchers decided to look to other ways to spend their academic time. A glorious period had been spent on physical fitness research, and the nation benefited from the results obtained by these benchmark studies. 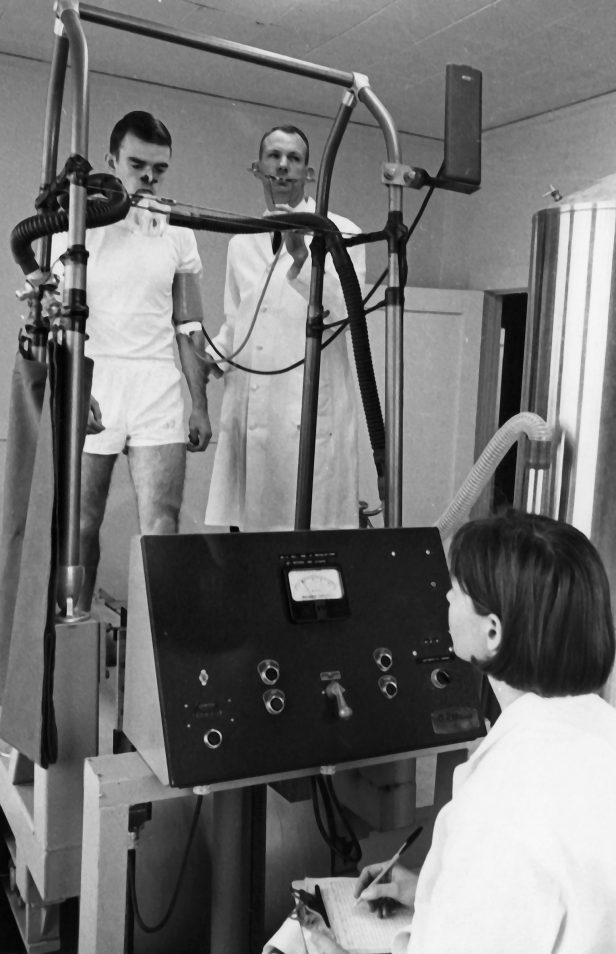 Dr. Harry Olree graduated in 1953 and returned to Harding in 1957 as a faculty member. He was appointed by President George S. Benson as chair of the physical education and recreation department and athletic director in 1960.

It has been 52 years since the NASA sponsored research program in performance physiology began at Harding University. Dr. R.T. Clark and Dr. Carroll Smith have passed on. Dr. Harry Olree and Mr. Bob Corbin are retired after distinguished and productive careers in both education and in work of the church. It is good that we honor all four of these men as representatives of Harding University for all the faculty. They came not to gain wealth but to join in a dream of Christian education for all who desired to make their lives and the lives they came in contact with better, richer and fuller.

Olree and Corbin took the lessons learned from the physical fitness research and created a health course for all Harding students in order to teach the principles they worked to develop. Olree and Corbin were also important members of the American College of Sports Medicine, which was first located on this campus.

Smith and Olree became church elders, and Corbin took many student groups to the mission field all over the world in short-term outreach visits for College Church of Christ. In 1978, Corbin was picked by Arkansas Gov. David Pryor to be the chairman of the Governor’s Council of Physical Fitness and Sports. He was also chosen by Republic National Life Insurance Co. to be their spokesman for physical fitness to their sales personnel.

Smith engaged and nurtured many students as an elder, teacher and avid cave explorer. His family still owns Alexander Cave in northern Arkansas. The family bought the cave, then sold it, and then purchased it again to protect this wild cave from being vandalized by careless explorers. Smith established a Spelunker’s Club at Harding and took many students on caving trips. He never lost his enthusiasm for spelunking and researching diets and diet supplements.

Clark, as far as we humans think, was one of the most knowledgeable men in his day on human physiology as it applied to airmen and astronauts. He was in the epicenter of all the activity in the nation as America raced to the moon. He was a great Christian man, teacher and researcher. He was an avid runner, and it is estimated that he ran more 30,000 miles during his lifetime. His knowledge, personality and connections were the catalysts that made it possible to have obtained the NASA grants.