In October, a little more than 50 years after he graduated, Daniel Coston’s (’68) paintings were displayed in the Stevens Art Gallery on campus. The collection consisted mostly of Arkansas scenes with the addition of a few southern Delaware landscapes, several portraits and a painting from his time as a student in 1967 that Dr. John Keller, chair of the art department, pulled from the department’s permanent collection.

“He turns the common structures and landscapes into memorable images that do much more than document the places, which he does with considerable skill,” Keller said. “His paintings also memorialize these locations as icons of place.”

Coston has been drawing since he was in elementary school when he remembers drawing cartoons on gum wrappers with his mom at church.

“It did more than just occupy me,” Coston said. “Drawing was the way I learned. It was how I examined objects. I was not a child prodigy, but I always was drawing and learning.”

Coston came to Harding planning to study math and science but was discouraged by the difficulty of certain classes such as physics. When his roommate asked him about switching to art because of his constant drawing, Coston took his Bible and English notebook drawings to the art department and immediately began studying art. Coston graduated with a bachelor’s degree in art with a minor in math, which allowed him to teach. He began his teaching career at Harding Academy even before graduating. After graduation, Coston moved to southern Delaware where he taught art to junior high students for eight years.

While teaching full time, Coston remained a student of art, reading and learning about art history and different artists while exploring his own artistic style.

“I am a learner,” Coston said. “I always have been and won’t stop any time soon. Also, I paint in many different styles and areas. Some of my work is abstract and definitely not representational. I do impressionist paintings and some things that are very realistic. Some of my work looks like covers to science-fiction novels, and some paintings seem to be historical in nature. I love abstract expressionism more than I enjoy extreme realism.”

Coston moved back to Arkansas in 1981 and taught high school in Dermott near Monticello.

He constantly maintained and refined his artistic skills by working on whatever projects he could, including illustrating local books and painting a collection specifically for a bank in Monticello.

“If you put your heart into whatever is offered, you actually develop as an artist,” Coston said.

“My favorite place in the world was my grandparent’s farm five miles west of Monticello,” Coston said. “For many years I have been painting that home place, working from photos I found and drawings I did early on. I regret that I didn’t have a camera in those days, and now I have to rely on my memory.”

Since many settings from his childhood memories no longer exist, Coston works mostly from memory, rarely creating a detailed, realistic painting but rather taking a snapshot of a memory and filling in the vague details, much like a photo taken from a moving car.

“We don’t live at a snail’s pace where we can see every detail. We see the world at a faster pace, and our memory has to do the catching up.”

At the end of the day, Coston considers himself a painter of the Arkansas scene and still often finds himself recreating scenes from his childhood memories.

“For me, my proudest accomplishment is that I taught school for more than 20 years and kept working at being a serious painter all that time,” Coston said. “It was not easy nor was it a way to fame and fortune. I continue to get better as a painter as each year goes by. I don’t ask for more than that. And [on top of that,] I was a serious art educator as well.”

After moving to Fayetteville in 1987, Coston is now able to work more on his art full time.

“It’s really important to dedicate yourself to putting in the hours needed to improve your natural ability,” Coston said. “My feeling is that you have to love what you do in order to improve. You have to believe in yourself and overcome the times when you don’t sell work and you don’t win awards. Believe, or you will probably give up.”  — Megan Stroud 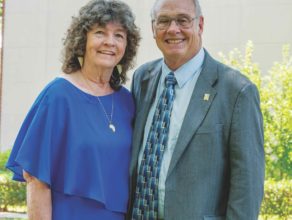