To celebrate Black History Month in February, Apple commissioned 32 Black photographers from all over the U.S. to capture their hometown through the lens of an iPhone 12 Pro in a series aptly named “Hometown.” Searching for talented photographers to feature, Apple reached out to Joseph Ross Smith (’18), professionally known as Joseph Ross, to photograph his hometown of Nashville, Tennessee.

Shortly after graduating, Ross moved to Nashville with $200, a car full of his belongings, and a whole lot of ambition. Starting out, he worked as a barista while taking freelance photography jobs as they came — cultivating a hobby Ross had picked up only weeks before graduation. He eventually began an internship for a local photographer whom Ross looked up to. “The internship opened my eyes to an entirely new world of photography — one that I could see a career in and one that I’d want to chase,” Ross said. “It’s almost been two years, and I never would have imagined I’d be a full-time photographer.”

Being commissioned by Apple comes with plenty of challenges and nerves, but Ross thrived in the pressure. “My best work comes from these high-pressure scenarios because it pushes me to think deeper and more creatively,” Ross said. The “Hometown” series was the first time Ross’ work was exposed to millions of people. The entire series was featured on Apple’s website and Instagram account, and Ross’ photographs were featured on six billboards throughout Nashville.

Ross photographed several places full of Black culture, but he specifically had Jefferson Street in mind. “Jefferson Street, back in its day and before Nashville’s recent ‘big boom,’ was the ‘Mecca’ of Black culture and history in Middle Tennessee,” Ross said. “I felt that shedding light on that bit of history was a critical part in trying to help preserve it.” Apple’s feature of Ross shows a video of a woman named Joi Ware dancing artistically under the Jefferson Street bridge and other photographs around Nashville, including a photograph of Ross’ niece.

Ross’ involvement in the “Hometown” series assured him there is space for him in the photography industry. He said being commissioned by Apple set the precedent for himself and other emerging photographers in Nashville. “For me personally, the ‘Hometown’ project was my opportunity to introduce myself to the photo world as an emerging photographer with a lot of passion and fire for this medium,” Ross said. “For my community, I hope that my involvement in this project as a representative of Nashville and the photos themselves inspired whoever saw them.” 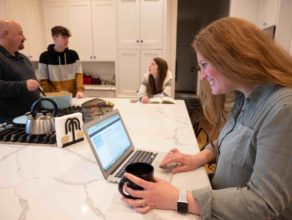