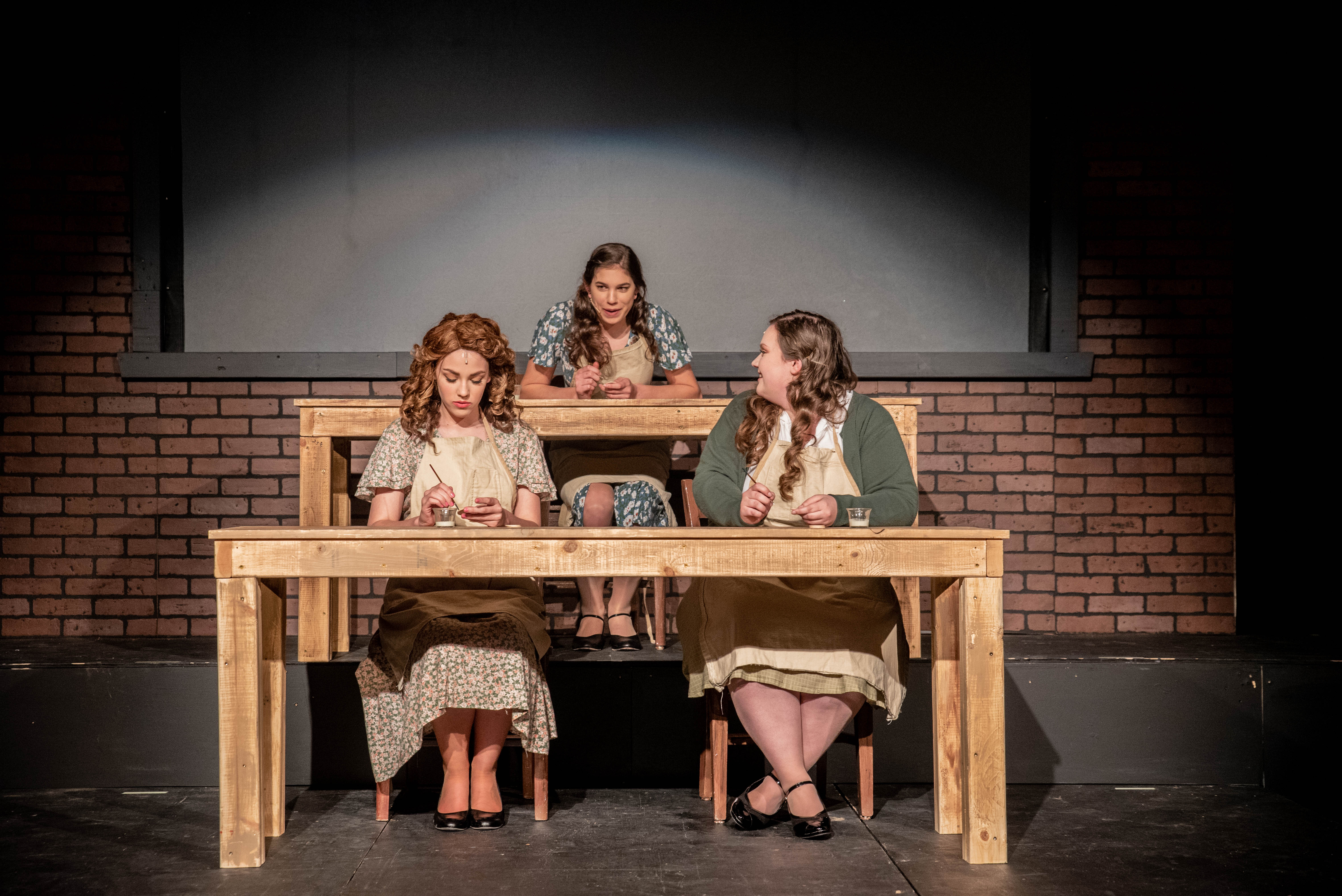 Written with warmth and humor, “Radium Girls” is a fast-moving, highly theatrical ensemble piece featuring the 16 Advanced Theatre students who play more than 30 roles — friends, co-workers, fiancés, relatives, attorneys, scientists, consumer advocates and a myriad of interested bystanders. The show offers a wry, unflinching look at the peculiarly American obsessions with health, wealth and the commercialization of science.

“We liked the idea that so many performers would have to play multiple roles,” said Melani Blansett, director. “Each student had to stretch their range, and it has been a wonderful learning experience.”

“Radium Girls” was inspired by a true story in the 1920s when radium was painted onto watch faces for its luminous qualities without concern for the health impacts of radiation exposure. The story traces the efforts of Grace Fryer (senior Ashlyn Nutt), a watch dial painter, as she fights for her day in court. Her chief adversary is her former employer, Arthur Roeder (senior Henry McGalliard), an idealistic man who cannot bring himself to believe that the same element that shrinks tumors could have anything to do with the terrifying rash of illnesses among his employees. As the case goes on, however, Grace finds herself battling not just with the U.S. Radium Corporation, but with her own family and friends, who fear that her campaign for justice will backfire.

“As the play is based on true events, the cast spent a few weeks researching the characters and their experiences,” said Blansett. “Students began to understand the historical significance of the story and hope to begin a conversation with audiences about the story’s impact on today’s society.”

The case brought by the “radium girls” is often thought of as a turning point in the labor rights movement. These women’s efforts are credited with significant improvements in industrial safety standards that workers benefit from even today.

“Working on this show opened many personal doors I never thought I would be able to access,” said Nutt. “Grace is drastically different from me so it was difficult at first to understand her. With time and research, I was able to feel a connection with this woman who broke so many societal rules to fight for what was right. These characters and their stories have taken our group by storm, causing us to want to learn and truly understand who we are trying to be as both actors and people.”

The show is the final class project of the Wildcat Theatre Co. Advanced Theatre Class. The goal this year was to highlight the individual talents of the six seniors in the class, but the class is also meant to give students the opportunity to extend their learning beyond the role of actor — to study all aspects of theatre and the history behind the script.

Tickets can be purchased for $5 at hardingtickets.com or at the door. For more information, contact the box office at 501-279-4255. For other Harding events and free and low cost services available to the public, visit harding.edu/community.

“Radium Girls” by D.W. Gregory is produced by special arrangement with The Dramatic Publishing Company of Woodstock, Illinois.