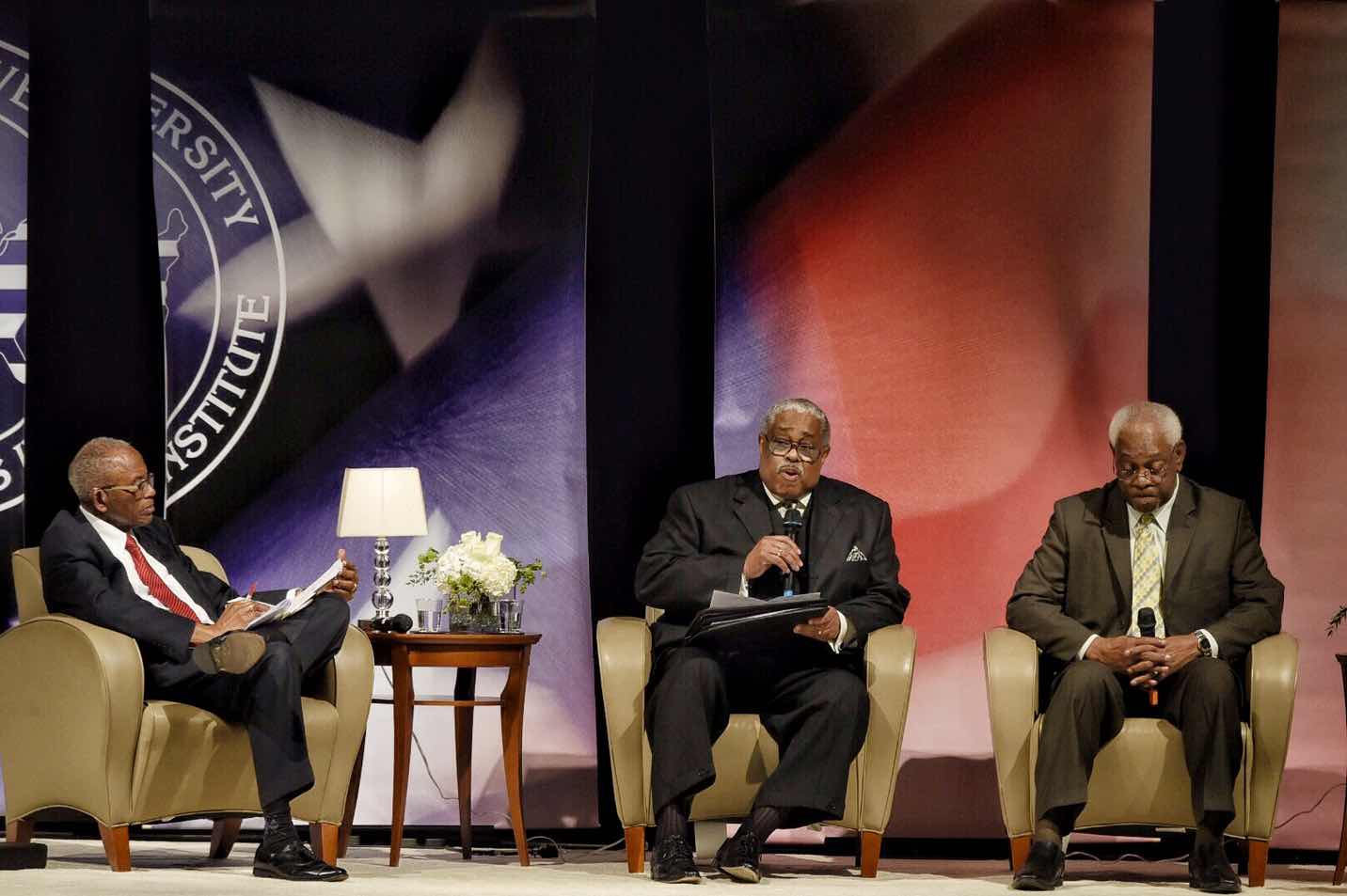 “I don’t think that tonight’s program is completely comfortable for anyone in this room,” McLarty said to introduce the evening. “There is tension in the cultural atmosphere in which we live. And I don’t expect us all to see things in the same way tonight or for our panelists to speak with a single voice. Different perspectives are what this evening is about.”

More than 800 people came to the Benson Auditorium to hear from Fred Gray, former attorney for Dr. Martin Luther King Jr. and Rosa Parks; Howard Wright, 1968 alumnus and member of the Harding University board of trustees; and Elijah Anthony, 1968 University alumnus and preacher.

The panelists answered tough questions on racial issues both past and present, and they offered insight on issues moving forward.

Gray, who spoke on campus in 2008 about civil rights in the past, present and future, shared personal experiences and his perspective on race today. “It’s a conversation that people are talking about across the nation. And those of us who are members of the Lord’s church should be leading that discussion,” he said. “I submitted to you [in 2008] three things that needed to be done in order to solve race problem. The things that I said almost eight years ago have not been done.”

McLarty posed questions such as “How does the past of race relations in America affect the present of race relations in America?” “Are there ways that well-intentioned white people unintentionally communicate disrespect to their black brothers and sisters?” “What is a word of exhortation you have for white Christians and black Christians regarding racial reconciliation?” and “How has the issue of race in America woven itself into your own life story?” 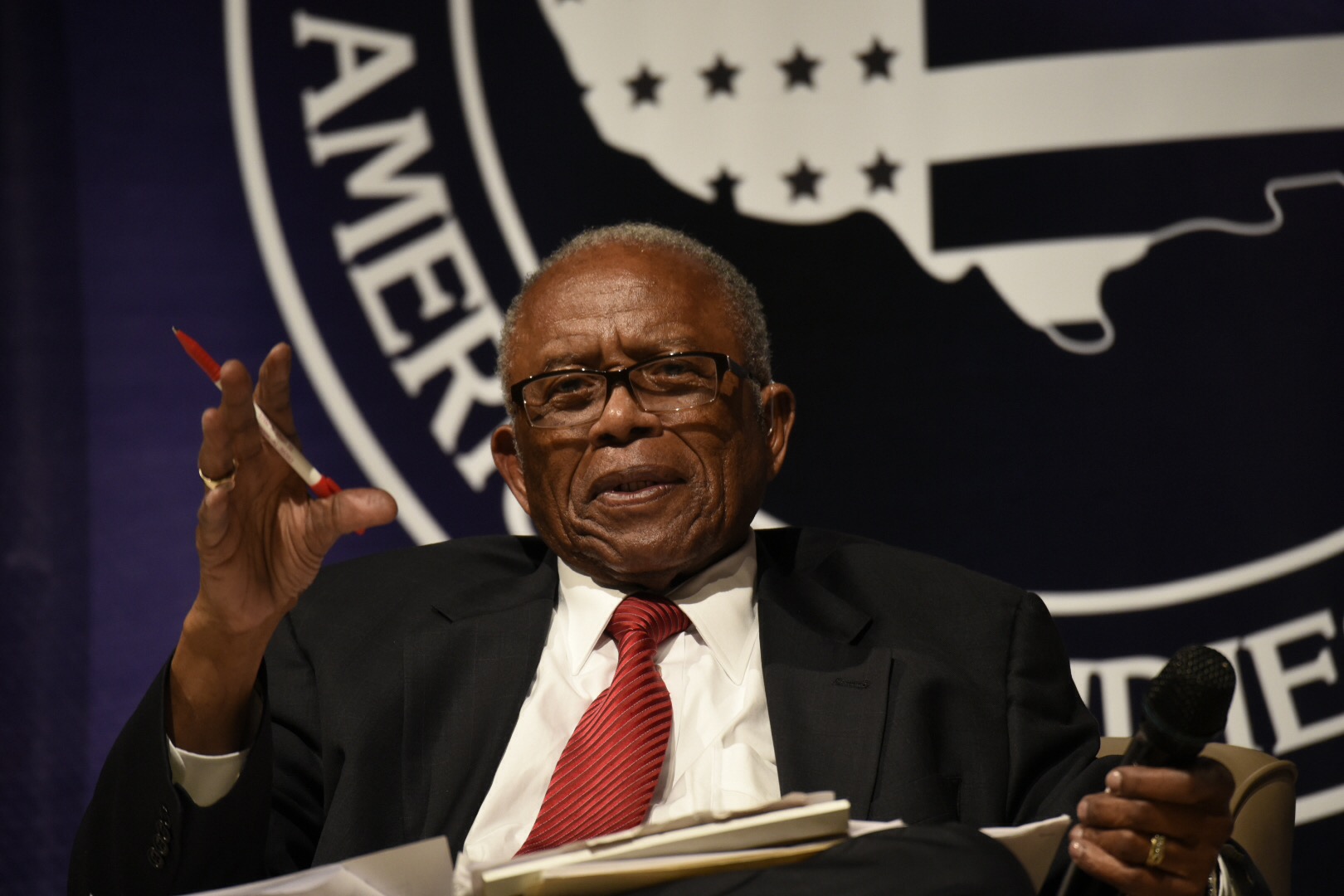 “I don’t remember having any contact at all with any white person other than the lady who my mother worked for from the time I was born really until almost I was in college,” Gray said. “And we didn’t really think about it. There were two worlds. There was the white world, and there was the black world.”

Anthony, who is one of the first two African-Americans to receive an undergraduate degree from Harding, expressed that even at a young age, experiences in his life made him feel like something was wrong with him.

“I remember standing in the alley in the rain behind a great restaurant in downtown waiting for a hamburger because I could not go inside to order it,” he said. “I remember as if it were yesterday getting on a bus where my choices were either sit in the back or stand up, even though there were seats available in the front of the bus. I remember going to the movies and having to sit in the balcony because I was not allowed to sit downstairs with white kids my age. I did not feel like anybody ought to have to be told what I was being told or treated they way I was being treated.”

Howard, also one of the first two African-Americans to receive an undergraduate degree from Harding, expressed “This forum tonight is a forum not just for exploration, but for action.” He shared his perspective on the “Black lives matter” movement that was sparked from the death of Trayvon Martin on Feb. 26, 2012.

“Somebody says, ‘Let’s start a movement called “Black Lives Matter,”’” Howard said. “All of a sudden, white people say, ‘How dare you? All lives matter.’ If all lives matter, why am I fearful when my teenage grandchildren, males in particular, get in a car and go down the street? Why do I have to pray that they get back home? Yes, all lives matter in theory. But in practice, we trumpet a cause that says black lives need to matter because of how they’re taken away from their parents and their families.”

Panelists brought up issues they felt were relevant to understand to overcome racial discrimination, such as educating young children and demonstrating equality in their classrooms.

“This is not a problem we’ve learned that we can legislate away,” Anthony said. “This is so systemic that we can’t legislate and change laws to change the way people feel in their hearts. This has to be taught. And as long as it exists, there is evidence that it is not being taught to the degree it needs to be taught.”

“This forum tonight is a forum not just for exploration, but for action.” -Howard Wright

Howard shared a story about attending his daughter’s third-grade play in 1980. When watching the play, he noticed that not one black or Hispanic child had a speaking part.

“What we’re teaching in a systematic way in America is that, if we’re not careful, our children will go to school in a hopeless, hapless and helpless educational environment that will make them feel like they cannot achieve.”

Kim Kirkman, associate director of ASI, said she was proud that this event happened on the Harding campus, and she said the panelists spent time interacting with students, faculty, staff and campus guests.

“Last night we witnessed three men giving powerful and honest testimonies of each of their lives,” Kirkman said. “Some of their words were hard to hear at times, but we must take what we heard and do something about it. I think that Fred Gray said it so well, ‘If we don’t realize there is a problem, we are never going to solve it.’”

The full presentation can be viewed here.