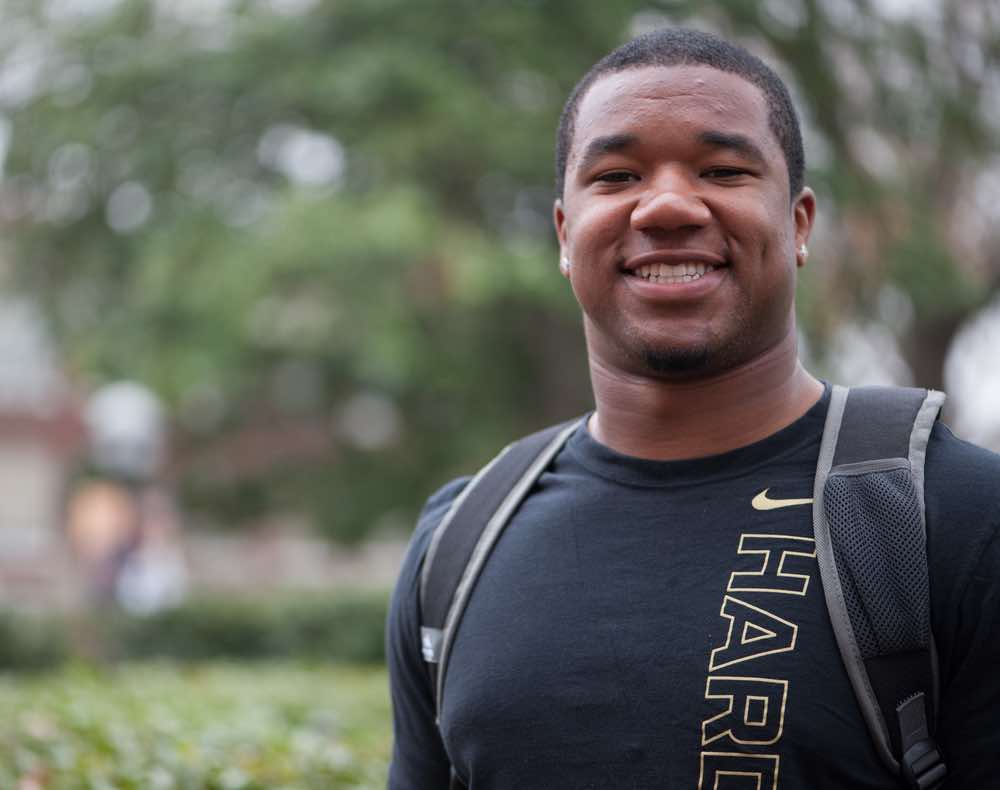 Initially interested in working for a police department after high school, Davon Morgan heard about Harding from a family friend, and, upon hearing they were recruiting a strong safety, began inquiring about a football scholarship.

“I came to visit in May, and I loved it. At that point in my life, I felt like this was the place I needed to be,” Morgan said.

After talking with a teacher in high school and his consideration for his family and community, Morgan felt best suited for law enforcement and chose to pursue a criminal justice degree.

“I just want to help people out,” Morgan said, “That’s the main goal. I want to make a good impression on youth in my community.”

Morgan plans to work for the Federal Bureau of Investigation and hopes he will make an active difference with those whom he comes in contact.

“I want to do SWAT and be hands on in the community,” Morgan said, “As a football player, I need to be active.”

Morgan said the most challenging aspects of being a criminal justice major are the tests and high expectations from professors.

“They prepare you for what you’re going to see later on,” Morgan said. “A lot of law school students say their tests are easy compared to ours.”

As a student-athlete and full-time student, Morgan has to balance a busy schedule but enjoys the challenge and even makes time to hold a part-time job working for the Department of Public Safety.

“It’s not too hard for me because I’ve been doing it my whole life — always having to balance school and social life along with sports and making sure I get everything done.”

According to Morgan, Harding has been a positive impact on his life and has helped him focus on his future.

“I think that Christian aspect in it brought me closer to God and that’s one of the main reasons I came — to get closer to God. If I had gone to another school, I probably would have gotten into some trouble or something, so I think this is where I need to be, and it’s helped me see how to put Christian values into my work,” Morgan said.

After living in San Francisco for two years after high school, Morgan said that coming to Harding was an adjustment to the culture and environment.

“It was kind of like culture shock honestly — I mean, I came, visited and loved it. They care about you and want you to do well, get your degree and even later on in life they want you to continue to be successful,” Morgan said. “I think it’s a great place for people to come if they know what they want to do, if they’re focused and want to actually get things done and have a better future for themselves and their families.”