Harding to present “Singin’ in the Rain” 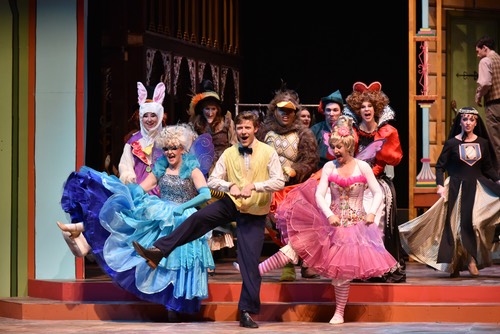 Harding will present “Singin’ in the Rain” Oct. 23 and 24 at 8 p.m. as a part of the University’s 91st annual Homecoming weekend. The department of theatre has been working since January to produce the show.

The first theatrical performance of “Singin’ in the Rain” was produced in 1983 by playwrights Betty Comden and Adolph Green, composer Nacio Brown, and lyricist Arthur Freed. It was adapted from the 1952 movie and sticks closely to the original plot.

The musical is set in 1927 where the movie industry was in the midst of pandemonium. A production company and cast have to make the challenging transition from silent films to “talkies.”

“Our audience is actually going to see some of the silent films that the characters have produced,” said Robin Miller, chair of the theatre department and show director. “To film these, our students have learned to copy the acting style of the silent films and have spent considerable time around Searcy filming.”

Miller said he looked for two important qualifiers when searching for a new script: an educational experience for students involved in the production and audience engagement.

“This show uses more metal work than any set in the history of Harding shows. Students have done considerable welding in the shops,” Miller said. “The work on the show is challenging, fun, rewarding, and ultimately a joy to see our students accomplish a wonderful event that comes to life in front of an audience.”

Tickets for “Singin’ in the Rain” are available online at www.hardingtickets.com for $15 or $18. Tickets can also be purchased at the box office in Benson Auditorium lobby an hour prior to the show. For more information contact the department of theatre at 501-279-5315.