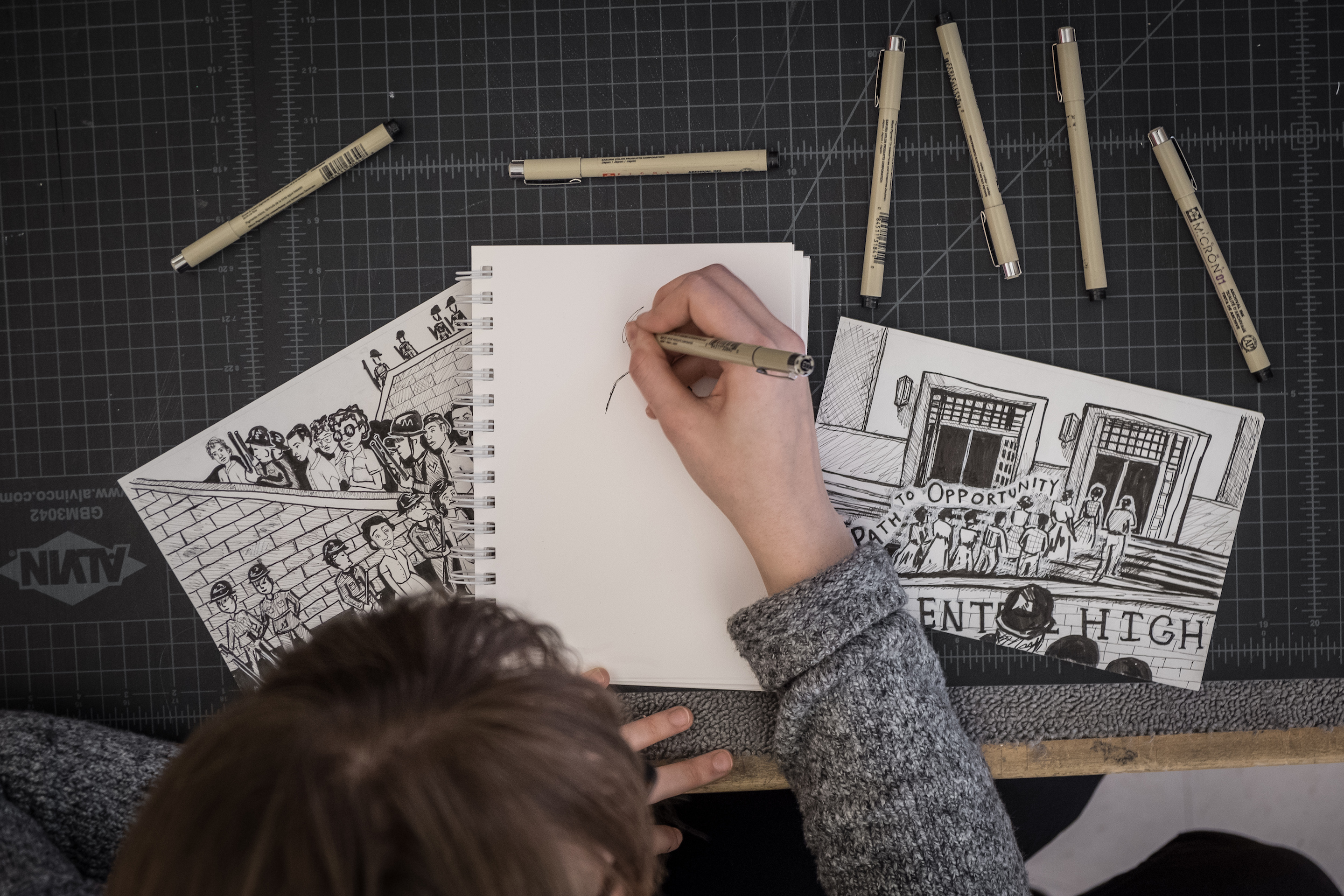 When graphic design major Rachel Gibson of Longview, Texas, came across a photo of Elizabeth Eckford, one of the Little Rock Nine, she was moved.

“A lot of people see these moments and these still photos and don’t realize that was an everyday thing,” Gibson said. “Elizabeth went to school for an entire year in an environment where no one cared how she was doing or what happened to her.”

Since she first came across the photo in 2016, Gibson has spent significant time drawing the photo. When she attended the American Studies Institute’s Distinguished Lecture Series presentation of Ruby Bridges in spring 2016 and heard that Eckford was in the audience, she knew she wanted to give the photo to her somehow.

“I talked to the person who was with her and said that I had an illustration of Elizabeth Eckford if she wanted it,” Gibson said. “He told me to email it to him, so I donated the photo to the Little Rock Central High School library.”

Gibson’s drawing of Eckford was used as the cover of the Little Rock high school’s Memory Project, which is a collection of stories about people who lived through the conflict during the Civil Rights movement. Soon after, Dr. Eurydice Stanley reached out to Gibson to see if she would create some illustrations for a book she, her 14-year-old daughter and Eckford were writing to tell the story of Eckford’s experiences at Little Rock Central High School.

“They saw the initial drawing that was the cover of the Memory Project, and they wanted that same style,” Gibson said. “Originally when I was drawing it, stylistically I wasn’t doing it to impress anyone. It was very messy and imperfect. It was high contrast and black and white. But she really liked it because it was messy and wasn’t pretty. She liked how that could add to the storytelling of Elizabeth going to school.”

Gibson created 10 illustrations for the book based on an outline of images the writers wanted to add to the story. She created all of the illustrations first with pen and ink, and then she transferred the tangible drawings into digital files in Photoshop to make any changes or adjustments.

“I did a lot of research just to get in the moment,” Gibson said. “I found a clip of a newscaster following Elizabeth as she walked into school, and I heard the crowd that followed her. It was a terrifying, eerie sound. She was just this quiet, small girl going to school. She looks very brave in this photo, but she was confused and terrified out of her mind, and you just hear this sound of anger and hate behind her.”

She completed the final illustrations for the book in December 2017, and signed copies of the book are available for purchase at Pyramid Art, Books and Custom Framing in Little Rock, Arkansas.

“I was really encouraged and honored to work with the incredible women who wrote and produced this book,” Gibson said. “I am just so floored that I got to use something I’m really passionate about to tell an incredible story like Elizabeth’s and be included in the message she’s trying to spread.”