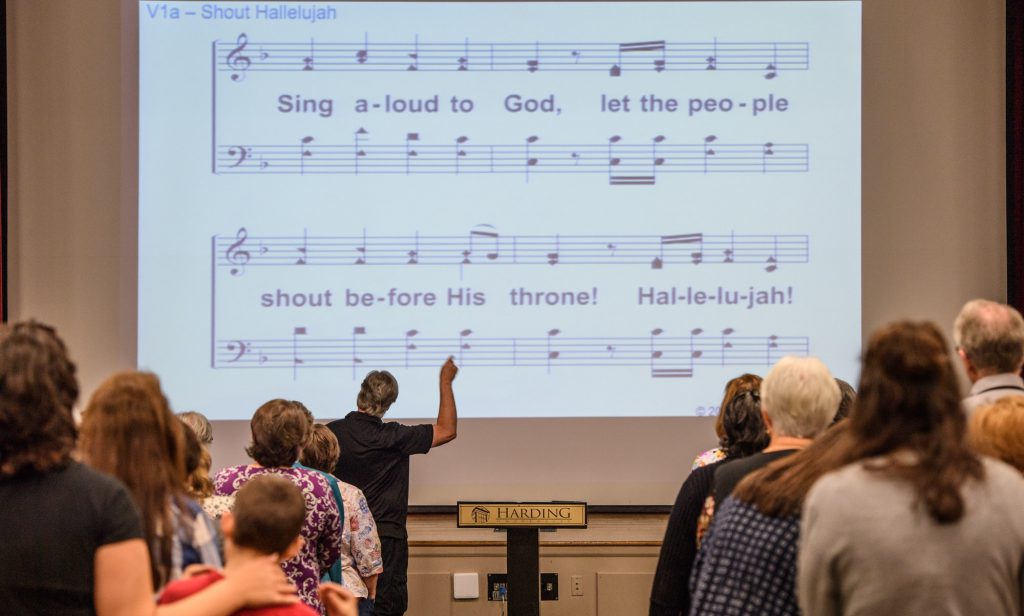 Harding University’s 93rd annual Bible Lectureship was held on campus Sept. 25-28. The theme this year was “Holy, Holy, Holy: Living in the Presence of God.”

“Holiness is such a fundamental concept,” said Dr. Dan Williams, vice president for church relations and Lectureship director. “We want people to regain an understanding of God’s transcendence and majesty. We live in a very unholy culture, and we are trying to reclaim holiness and the concept of holiness.

Senior Caitlyn Spears presented her lecture, “Beauty in the Broken,” Tuesday at 4 p.m.

Spears is a social work major from Searcy, Arkansas. She focused on 2 Corinthians 12:9-10, expanding on God’s grace and power to use weakness for his glory.

“I believe that Jesus calls us to embrace and understand that there is beauty in the brokenness of this world,” Spears said. “We are not perfect, but when we look through the lens of God, we find that we are perfectly imperfect.”

Spears shared the story of her mother’s battle with rheumatoid arthritis. When she was younger, Spears struggled with questioning and understanding why bad things happen to good people like the chronic illness her mother had.

“I went through a lot of questioning, and I felt like Job’s friends at times, but I didn’t understand because I didn’t see with the perspective of the cross,” Spears said. “God had turned her into something beautiful and into something angelic.”

Spears said her mother was joyful and ministered to people she encountered during hospital visits and doctor appointments. Her mother lived by perceiving weakness as an opportunity to show Christ.

“That’s what brokenness is all about,” Spears said. “It’s about submitting yourself and allowing God to do what he wills in that brokenness and allowing it to transform you into something that he has desired for you when you submit and humble yourself.”

Similar to her mother, Spears said she learned to grow from struggles as well. Her internship with River City Church in Little Rock required her to step out of her comfort zone.

“I was spiritually and emotionally in places where I was broken, and I needed God. And he was always there reaching out his hand to me to pull me back up,” Spears said. “When we try to live a comfortable life, we can coast through life. You can be fine and dandy, but you will never grow — you will never be challenged.”

“God is your artist, and he is working on you daily.” -Caitlyn Spears

She concluded her lecture comparing the lives of people to the art of stained glass, and she offered encouragement and a message of hope that God will work through those experiencing brokenness.

“Stained glass is only broken pieces of glass stuck together by some artist to form some design to tell a message or to tell a story and to entrance people to show them the light, and that’s what you are,” Spears said. “God is your artist, and he is working on you daily. He takes those pieces that you view as broken, and he is working them and molding them to be pieces of a beautiful masterpiece that hangs on his throne that he admires.” 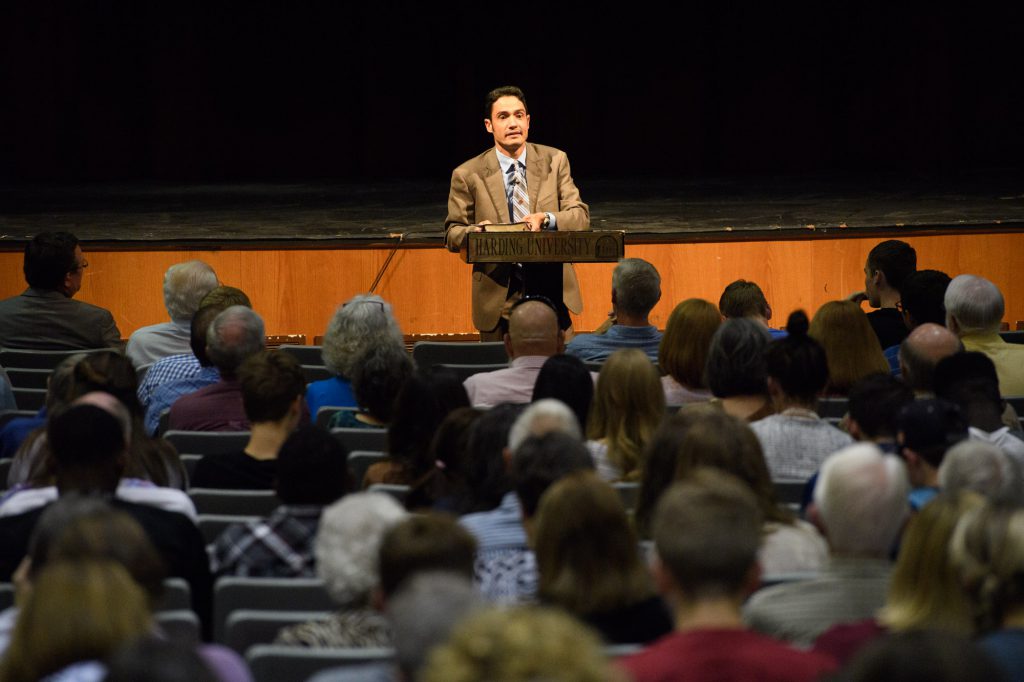 Wissam Al-Aethawi presented three coordinating lectures during the course of the week. Visitors, faculty, staff and students gathered to hear how Al-Aethawi converted out of his family’s faith in Islam, through atheism, and into Christianity.

Al-Aethawi’s first lecture on Monday, Sept. 26 was titled, “From Muslim to Christian, part 1: I am an Arab, and I am a Christian.” Al-Aethawi shared his experiences of living in an Islamic neighborhood when he began seeking truth.

In 1979, Al-Aethawi was born in Baghdad, Iraq, where he was raised most of his life. In his lecture, Al-Aethawi explained how the fear of the Iraqi government caused him to want to be a “truth-seeker.”

“Imagine living in a community that does not practice the biblical values of peace and love and grace,” Al-Aethawi said.

Al-Aethawi said that the first time he had ever seen a Bible was when it was shown in Tom Cruise’s first “Mission: Impossible” film, which premiered in 1996. After the movie, Al-Aethawi said he went to the flea market in Baghdad and bought the gospel of John but quickly threw the gospel away, thinking it was the entire Bible. After his second year of college, he went back to the same flea market, found and bought a full version of the Bible.

“I started to be intrigued with the book, but I could not ask any questions,” Al-Aethawi said. “When you give a Bible that is not a study Bible to someone who has no biblical background, never been to church, and never heard of God’s word, there is only so much you can expect that person to understand. I did not have any Christian friends in my all-Muslim neighborhood or in the first two years of college.”

During his third year of college, Al-Aethawi met a Catholic man who answered some of the questions he had.

“I was so happy that the book I already started to fall in love with, a book that has the solution to every problem we suffer from, a book that is both beautiful and good, turned out to be true,” Al-Aethawi said. “But where I come from, the Bible is synonymous with corruption.”

Al-Aethawi kept his Bible among the rest of his school books so that his family would not know. One day his mother confessed she knew what he was reading and that he was bringing shame and danger upon their family. According to Al-Aethawi, this encounter caused him to question whether the Scripture he had been studying was true.

“I gave away my Bible, and it was only a few weeks later when I realized that the hope and the satisfaction I had when I claimed God’s promises in his word as my own could not be replaced with any security in this whole world,” Al-Aethawi said. “So I got a new Bible, in English this time, so that no one else could understand what I was reading. And I continued to read the Bible in secret for the rest of my time in Iraq.”

For the next 12 years, Al-Aethawi studied the Bible on his own. He said he wanted to be baptized but felt that he “was the only Christian on earth.” Aethawi explained that he found a book written by a British man titled “Bible Basics” and ordered a free copy. The author of the book saw Al-Aethawi’s order and emailed him saying that he needed to be baptized. Al-Aethawi replied and said, “Thank you sir, but I am from Baghdad. Read the address!” On May 26, 2010, the British author baptized Al-Aethawi in the bathtub of a hotel room in Northern Iraq.

Al-Aethawi was admitted to the U.S. as a visitor, and after relentless efforts from Christians he had met in the states, he started school Jan. 5, 2012. According to Al-Aethawi, one of the deans at his school asked what he planned to do after graduation, as if he had been planning this circumstance his whole life.

“I then remembered that for years I used to pray every day that I would have religious freedom to worship God with a clear conscience and in return I would serve him for the rest of my life,” Al-Aethawi said. “That’s when I told [the dean] I planned to take the word of God to the Muslim communities in the United States.”

“Six years ago I used to hide my faith to stay alive. Today, I share my faith to make a living.” -Wissam Al-Aethawi

According to Al-Aethawi, the very next day was when he was issued his first legal papers into the U.S. He finished school and moved to the metro Detroit area where he started an Arab Christian ministry.

“Ever since then, I have been humbled with a front row seat to see God work among Muslims coming to Christ by the dozens,” Al-Aethawi said.

Al-Aethawi continues to minister and speak to churches and schools nationwide, recently expanding globally with his first international visit to Canada.

“Six years ago I used to hide my faith to stay alive,” Al-Aethawi said. “Today, I share my faith to make a living.”