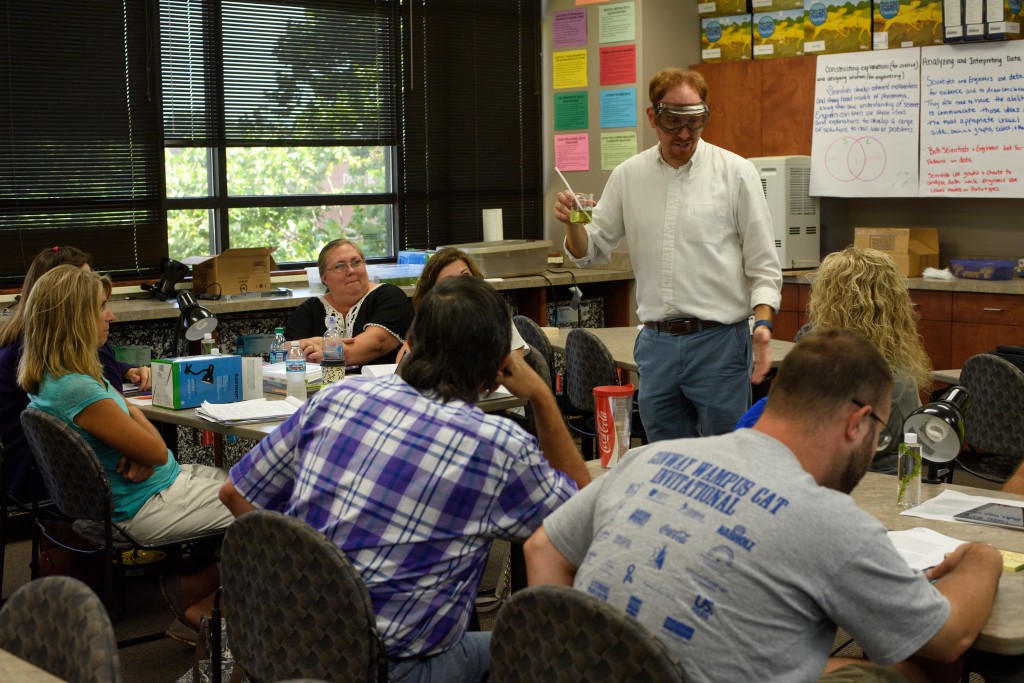 This summer, the Finley STEM Center has been educating teachers in the White County area on how to implement new science standards in their classrooms with a workshop titled “New Standards Infused Hands-on Science.” With the help of a Title II, Part A: No Child Left Behind grant, teachers are being equipped with the resources to make those standards a reality.

In 2014, the Arkansas State Board of Education voted to implement Next Generation Science Standards statewide. By 2018, the standards will be applied in all kindergarten through 12th grade classrooms across the state, and students will be at the same educational level as other students across the nation in science achievement. The work of the Finley STEM Center is aimed at helping teachers understand these new standards and implement them effectively and within the required timeline.

For the past two weeks, Ben Carrigan, elementary science instruction specialist, and Dr. Jon White, assistant professor of engineering, have led instruction in the workshops ranging from the logistics of implementing these new standards to what Carrigan called the “cooler stuff” — engineering, robotics and coding. Through the grant, teachers are equipped with books and supplies to help make these standards and tools in action.

“I think the biggest benefit for the participants is that many of them are being introduced to the background research and layout of the new science standards in Arkansas,” said Dr. Allen Henderson, director of the Finley STEM Center. “These standards will include engineering concepts that are new to most seventh-12th grade teachers, and this workshop is providing some hands-on experience with robotics, electronics and programming.”

In the morning sessions, Carrigan helped teachers understand how to use the Next-Generation Science Standards. These standards reflect science practice and experience in the real world, build from kindergarten through high school, integrate core ideas and practices, and make connections with students’ learning in literacy and math. As Carrigan describes it, through the standards, students will learn “to think, act and do like scientists and engineers.” 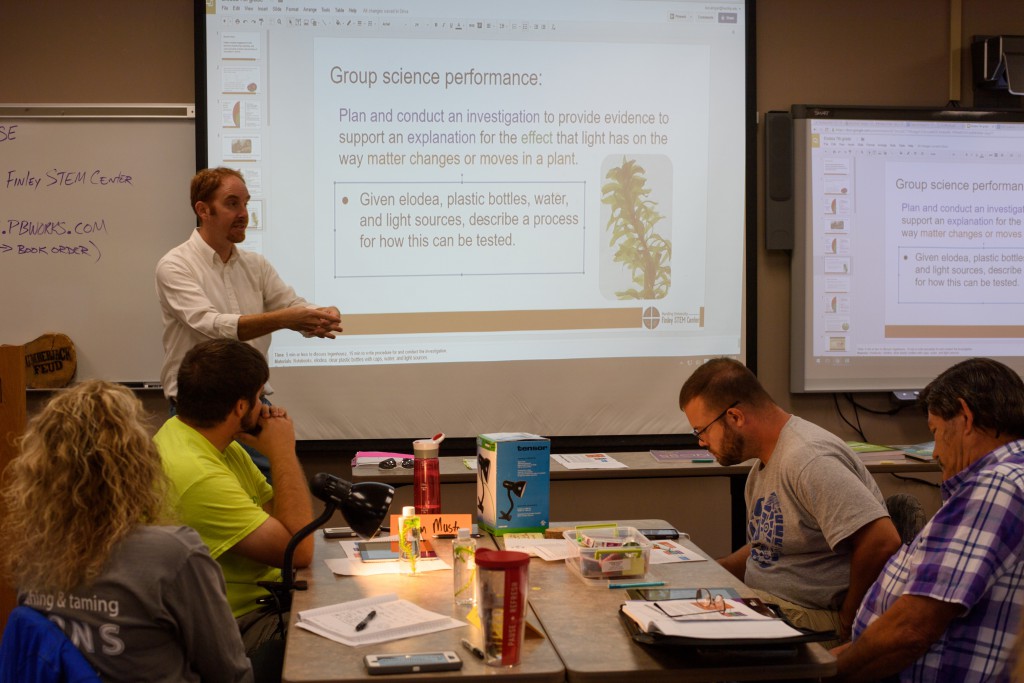 “We’re going into the logistics of the standards and how to develop better lessons plans around a scientific phenomena,” Carrigan said. “So that means looking at things in nature that you observe and developing your science lessons from there.”

In the afternoon sessions, White showcased new skills in robotics, coding and engineering that teachers can present to their students in the classroom.

“Hands-on learning and integrating these standards into experimentation is one of the primary goals for the workshop,” White said. “We’re doing some LEGO Mindstorms robotics with the idea of incorporating science with the teachers. Also, we’ve been working with arduino, which is an inexpensive robotics system that allows them to do some basic programming and some of the basics of robotics — things like motors, LEDs and resistance.”

According to White, the growth of STEM education in Arkansas is not as fast as it should be, so this workshop and others like it are equipping teachers and students around the state to be competitive in education and the workplace.

“The science and technology career fields are some of the primary drivers of our modern economy, and when you look at the state of Arkansas, the STEM fields have been growing but not in line with the growth in population or with the growth in demand,” White said. “Most career fields today require a lot more knowledge about science, technology, engineering and math to be successful.”

White said a big takeaway from the week for him is realizing that teachers want the best for their students and want to try new things, and he feels the resources he and Carrigan taught were incredibly well received.

“Teachers, if given the opportunities and tools, want to integrate more technology and engineering into their classrooms,” White said. “When you have students who are motivated to continue on, this helps them choose that as a college career, and it helps our economy.”

For Carrigan, he sees the new standards as a cornerstone for helping out the next generation.

“The new science standards really have a focus on science and engineering now, and we’re trying to give all students that base knowledge to become informed citizens,” Carrigan said. “Those standards and these new resources will help to give that foundation or push for those who will be our future scientists, technologists and engineers.”