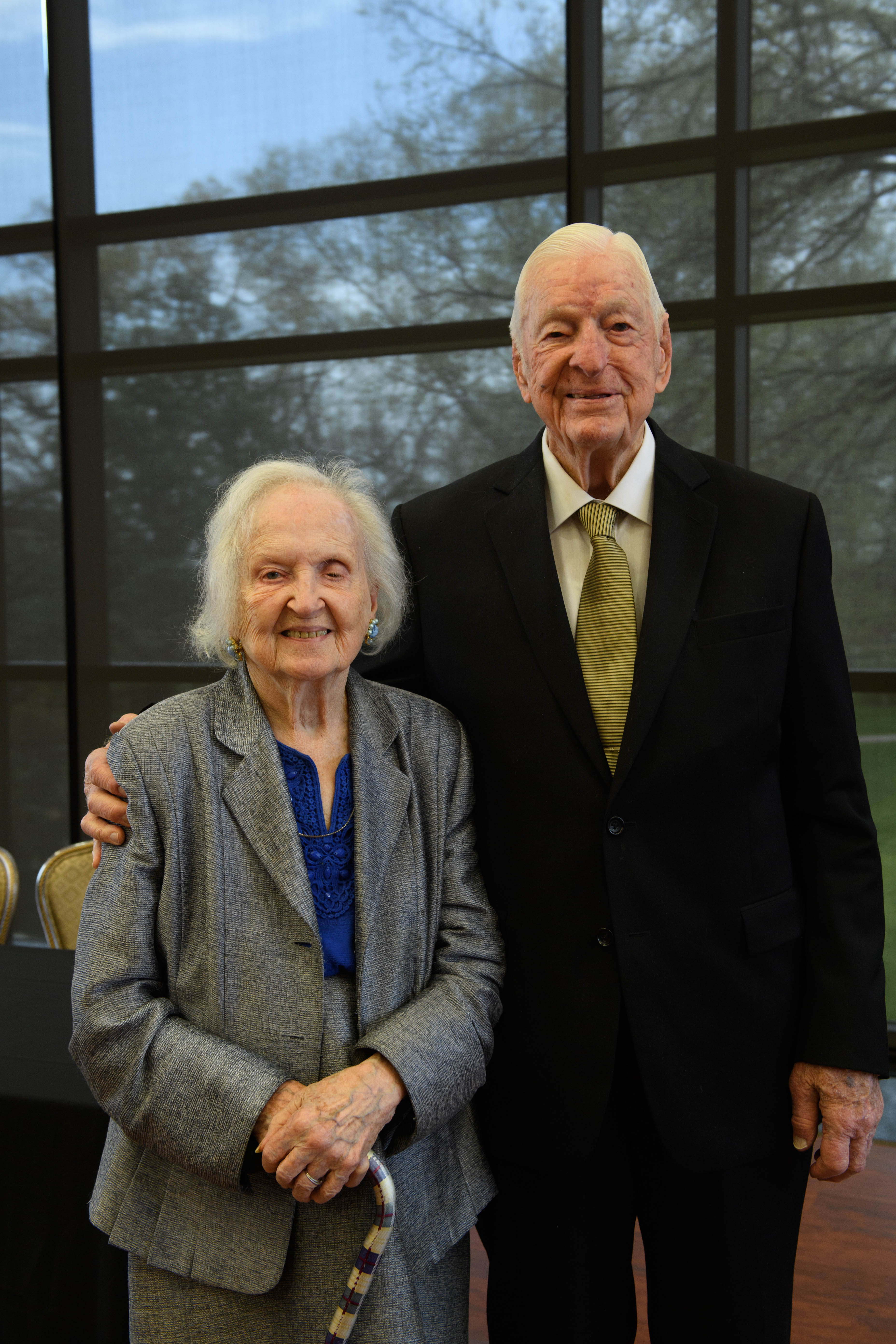 Dr. Cliff L. Ganus, chancellor emeritus, enrolled in Harding as a business major in 1939. He was 17 years old and intended to move back to his hometown of New Orleans after completing his studies to assist his father who owned a restaurant business in the city. His plans changed during his first year at the University, beginning with his first 10 seconds on campus.

Louise Ganus, then Louise Nicholas, was carrying brooms to be distributed to each dorm with two other women. It was her second year at Harding, and she was studying English. Cliff, dressed in a white suit, approached the women asking to find then president George Benson.

“School didn’t even start until the next day, and I already had my wife,” Cliff said. “That’s pretty good for a freshman. We went together the next four years.”

By the third month of his college career, Cliff was asked by L.C. Sears, the dean of college to preach at a local congregation.

“My first impulse was ‘no,’ but I didn’t know how to tell the dean no, so I said, ‘OK, I’ll try,” Cliff said. “I remember studying six hours for that 10 minute talk. It took me six minutes to give it, and I remember how perspiration just rolled down my back and my legs. I thought it was so hot in November, but I didn’t faint, and I felt that night that I was going to preach — that’s what I was going to do.”

Cliff graduated with bachelor’s degrees in Bible and history in 1943. He and Louise married in Godden Hall an hour and a half after he walked across the stage to receive his diploma from Harding.

“My dad said, ‘Now Cliff, don’t marry until you graduate,’ and I didn’t. I waited a whole hour and half in old Godden Hall in the second floor auditorium,” Cliff said. “I graduated at 11:30 a.m. in that auditorium, and we married at 1 p.m. in the same auditorium.”

The couple spent their first night in the Peabody Hotel in Memphis, Tennessee, and spent the next few years in Charleston, Mississippi; New Orleans; and Gulfport, Mississippi, while Cliff served as a pulpit minister to several congregations, sometimes up to 10 at once.

President Benson asked Cliff to return to Harding as a Bible and history professor in September 1946.

“I said when I left [Harding], ‘There is one thing I’ll never do: teach’ — famous last words,” Cliff said. “When Dr. Benson called me and wanted me to teach history and Bible, I jumped at it because I loved Harding so much. I know what it did in my life, how it changed me and set me on the right course, and I know how many other students, too, had the same experience that I had that really turned them around. I know many of them personally. Loving Harding as I did, I was happy to come back and teach, and I really enjoyed it.”

The couple moved into a small home on Market Street and University Drive, now home to the Original Rock House college outreach ministry of the College Church of Christ. Their family grew to include three children, two of whom are current professors at Harding and the other a member of the Harding board of trustees. Their footprints are still imprinted in the back of the house.

The Ganuses’ daughter Debbie Duke, professor of math, said Harding was a fun environment to grow up in. She said the family was involved in nearly every campus event and constantly hosted visitors in their home.

“Harding was just like a sibling — it was just part of us; it was part of the family. We knew that Daddy loved Harding as much as he loved us. We were just all — our life was Harding, and that’s fine,” Duke said. “It was a wonderful little house; I have so many great memories from living there.”

During Duke’s childhood, very few restaurants and shopping centers lined Race Street, there was one stop light in Searcy, and the city limits ended just behind the current Rhodes-Reaves Field House. Long before Aramark offered food services to campus, Duke said she remembers her mother catering for Harding visitors.

“When we had dignitaries in our home — just anyone — my mom was cooking, she was cleaning, but that was a thing our family did: entertain all these people,” Duke said. “I think her job with Harding included a lot of just physical labor.”

Louise managed her role as a full-time mother, wife and hostess while also starting Associated Women for Harding (now known as Women for Harding), Girl Scouts and Green Keepers, the garden club which she is still a part of. The family built a new house on the outskirts of campus in 1961 where the couple still lives today. Louise said they needed a larger home for guests.

Cliff became dean of American Studies in 1952 and president of the University in 1965, serving for 22 years. He then served as a chancellor after his presidency and continues to serve as chancellor emeritus. He has occupied the same office for more than 51 years. He played a vital role in bringing varsity athletics to Harding in 1957 and attends nearly every sporting event.

“I loved athletics and played against the students in all the different sports and loved it,” Ganus said. “We played rag tag football. I played until I was 62 against them. Played handball and softball against them until I was 76. I don’t miss a football game if I can help it. I would have to be awfully sick to miss a game.” 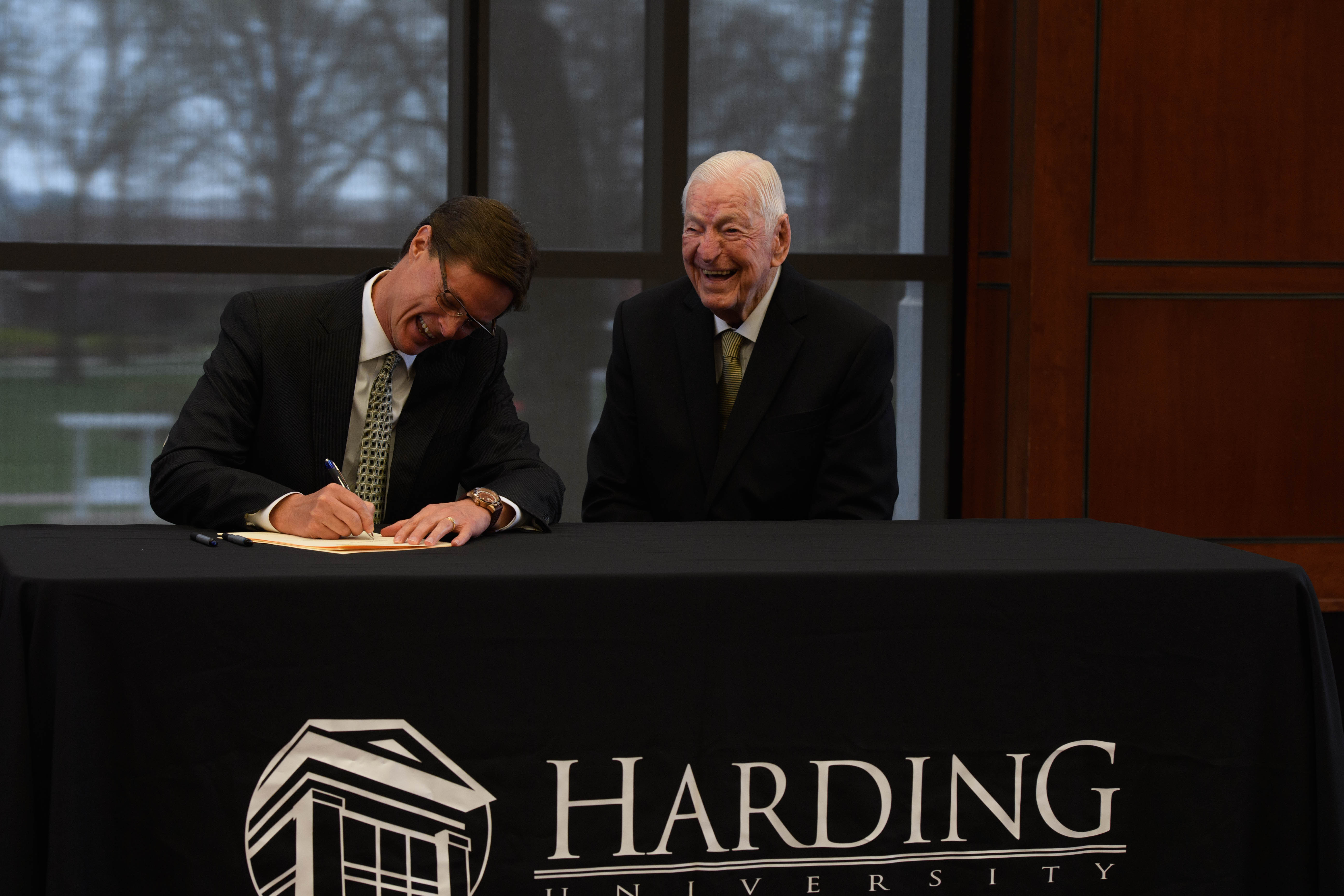 In March, with donations from the Ganus family, the University established the Clifton L. Ganus Jr. Distinguished Chair of History and Political Science in the College of Arts and Humanities. The endowed chair will serve to enhance the level of teaching and learning of history and political science not only in the department but also throughout the University.

“Most people know Dr. Ganus as an administrator for the University and an effective speaker and preacher,” Senior Planned Gifts Officer Don Kee said. “Generally, only former Harding students over age 70 know him as an outstanding history teacher and chairman of the history department. Dr. Ganus was a dedicated student and teacher and an accomplished historian.”

Louise celebrated her 95th birthday Feb. 9, and Cliff turned 95 Friday, April 7. The couple has been married for 74 years during which they have visited more than 70 countries together and always returned to their favorite place: Harding.

“I’ve been in a lot of places, but I don’t know of any better place,” Cliff said. “I think the spirit of Christ is the spirit of Harding. We are not perfect; we make mistakes; we’re human, and any human institution is going to have problems from time to time, but you have to go a long way to find a better group of people working with a better spirit and attitude. That has always impressed me.

“I know what Harding did for me, and I know what it has done for so many others. If that is still happening and we still have the basic principles and spirit and ideals of the Lord, that’s where I want to be. I don’t know of any better place to be. It’s one of the best places in the world — and I’ve been all over the world.”