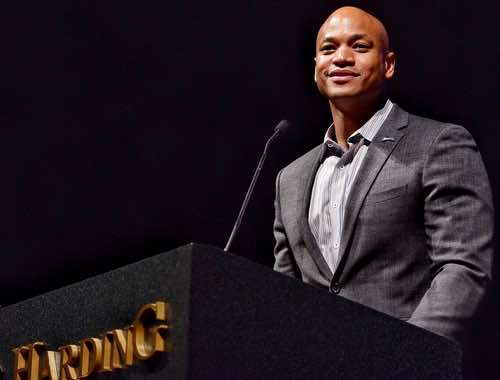 Approximately 700 people attended the second presentation of Harding University’s American Studies Institute Distinguished Lecture Series Tuesday, Nov. 3 with author Wes Moore. The message of his presentation, titled “Potential of Education for Transformational Impact,” encouraged students to use their skills, knowledge and passions to make a difference in the world.

“’What is your major?’ is not the most important question you will ever be asked. ‘Who did you fight for?’ is,” Moore said. “Higher education is defined by your ability to take the things that you have learned to make it matter to someone else besides yourself that you were even there.”

A decorated Army combat veteran, youth advocate and CEO of BridgeEdU, Moore shared moving stories about his friends and family making a difference in the world, and he revealed some insight into one of his New York Times best-selling books — “The Other Wes Moore.”

“The Other Wes Moore” is a story of mentorship and support networks that refused to let Moore fall into crime and drugs. It tells the tale of two kids with the name Wes Moore living in the same decaying city. Moore investigated the man with the same name, who is currently serving a life-sentence in prison for the killing of a police officer during an armed robbery. But he said his book is not about him or the other Wes Moore — it’s about the “others.”

“Our society is full of ‘others,’” he said. “What we do to push for and fight for the others is what matters. It says nothing about them — it says everything about us. Higher education will be how you take your life experiences and make them matter to others.”

Moore graduated Phi Theta Kappa from Valley Forge Military College in 1998 and Phi Beta Kappa from Johns Hopkins University in 2001. He completed a Master of Letters degree in international relations from Oxford University as a Rhodes Scholar in 2004. He admitted that he didn’t know what he wanted to major in when he started college, and he encouraged students to use what they are learning in school to impact the lives of other people.

“Do not let the major that you choose enslave the decisions that you make about what you want to do later on,” he said. “We have a shot, an opportunity and a blessing to do remarkable things with our time here — to make higher education mean more than walking across a stage. All you need to make a difference is a passion. And with that, you have everything you need to change the world.”