Sonic Drive-in’s franchisee Greg Rowden thought he wanted to become a coach, but he quit college with only one course and a semester of student teaching standing between him and his goal. He says God had other plans. The Paragould native spoke to students at a Lunch-and-Learn in the Paul R. Carter College of Business Administration this week. 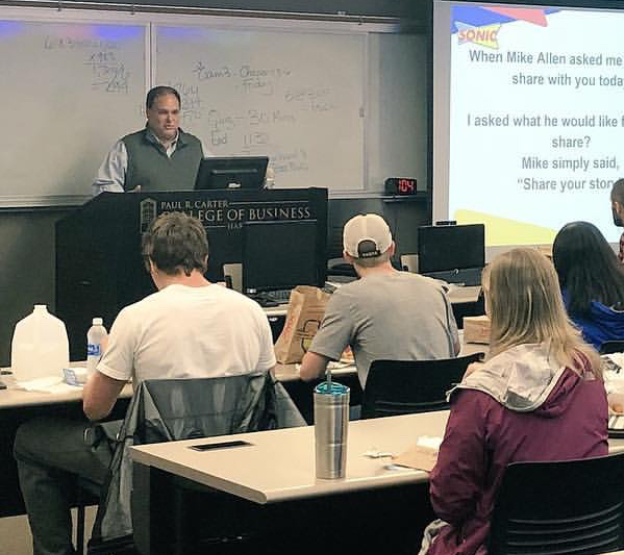 From his opening with a Sonic trivia game, Rowden captured the attention of his full house with an energetic, unpretentious assessment of his journey — both his early success and the challenges that later developed. As the audience ate a sack lunch of corn dogs and tater tots provided by Rowden and his Sonic crew, he credited his educator parents for some important life lessons.

“My mother always said your attitude was very important,” Rowden said “My father taught me to work hard. I had a full-time job at a gas station when I was 15.”

While working there, he was approached by a customer to work at Sonic.

“She wanted to know if I could roller skate. I could — but not as well as I thought I could!” he quipped.

He started as a car hop, managed a store by 19, and by age 21 was earning more than $100,000 per year traveling and helping with supervision of stores. But there was a price to his early success.

He described a personal tipping point on a Sunday drive from Paragould to Blytheville after an early morning fight with his wife. He couldn’t stop thinking that he was not what he should be. He prayed for the first time in a long time.

“I knew I needed to change, but I didn’t know how to get out of the situation I was in.”

The money was very good. He considered whether perhaps his wife stayed with him because every year they had a better house and a nicer car.

He left it with a simple prayer, his first in a long time. “God, show me how.” From that time, things began to change for him. The owner of the Searcy Sonic store called unexpectedly and offered to sell him controlling interest in the Race Street store for exactly the amount for which the bank was willing to approve a loan. He accepted the offer without consulting his wife, “something I do not recommend,” he said with a sheepish grin. That day was the first time they ever prayed together. Their house in Paragould sold in one day, and from that point, their situation began to improve both personally and professionally.

Twenty-seven years later, Rowden and his partners in DHR Sonic Group, Rick Davis and David Hall, own and operate 33 Sonic Drive-In locations. One of the most successful is the store at the corner of Benton and Race Streets in Searcy. Before they moved the store down the street, it was a top 10 percent store, employing 50 people. After moving last year to the high-traffic corner that formerly had a Wendy’s location, the store is in the top one percent nationally, and employs 84 people. “If you are looking for a job, we are hiring,” Rowden added, smiling. Now it is common for the location to hit number one in the nation on special event days.

He shared a handout of his favorite wisdom with students. From Jeremiah: “You will seek me and find me when you seek me with all your heart.” From Theodore Roosevelt: “People don’t care how much you know until they know how much you care.” From Zig Zigler: “You are what you are and you are where you are because of what has gone into your mind. You can change what you are and you can change where you are by changing what goes into your mind.”  John C. Maxwell: “Change is inevitable, growth is optional.” And Rowden: “I am not in the burger business. I am in the people business.”

He was making excellent money for his age before he turned his life toward God, but Rowden believes deeply that the trajectory of his life and his greatest success was shaped by God’s blessing. He encourages students not to compartmentalize their faith from their business life.

“Listen to the Holy Spirit,” he says. “The Holy Spirit is the most untapped resource in the world.”  Those values are embedded in DHR’s corporate mission statement, to “excel in honoring God in all we do, especially in customer service, community involvement, and in offering opportunities for growth to our people.”

Rowden left students with this remembrance of his father, who died a year ago: “I dropped out of college to manage my first Sonic. I decided I wasn’t patient enough to wait, even though I lacked only one class and student teaching to have my license. I got an offer to go to the little town of Walnut Ridge to re-open a store that had been dormant for many years.”

The facility was in horrible shape. It had been vandalized; there was graffiti on the walls and the bushes were taller than the eaves. He took his educator father with him to tour the abandoned property before telling him he had already accepted the job. He explained in detail what he wanted to do to bring it back to life–what equipment he would install, and how he would provide the best customer service. “Dad had a glazed look on his face,” Rowden said. He could have said, “Are you crazy?” But he didn’t. He said, “If anyone can do this, you can.” He paused, “I can’t remember all the times I have thought about that statement when things got really hard for me. I hope someday each of you have the opportunity to share those same words with someone.”

Entrepreneur Greg Rowden started out wanting to become a coach. And we think he is one.

More information about Sonic franchise opportunities is available on their website. 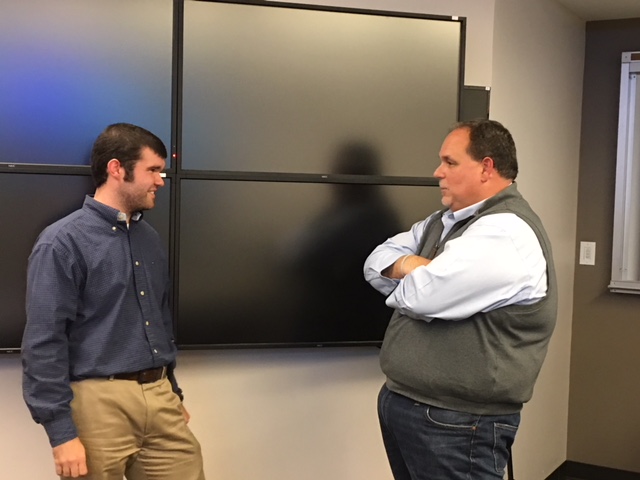