This article is the latest in a series featuring Harding student entrepreneurs. 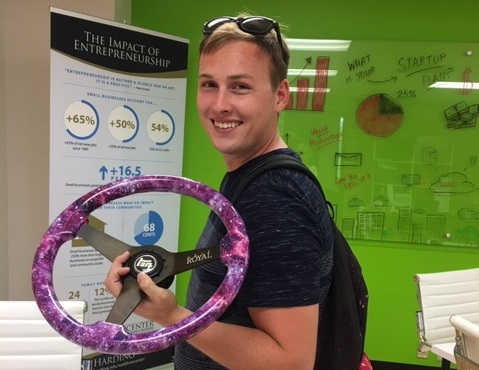 Joshua Clemons of Newport News, Virginia, literally carries with him a symbol of his most defining trait: His hobby is cars; his passion is cars; his side hustle is cars. He’s a senior management major who’d like to find his future in the automotive sector. Even if you don’t know him personally, you may know who he is; he’s the guy carrying the steering wheel. 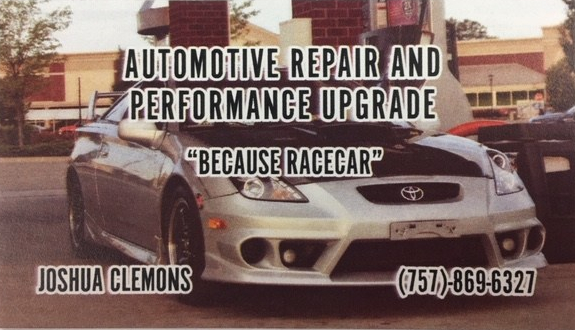 He laughs. “It may seem a little weird, but it also gives me an opening to offer people a business card when they ask about it, and to explain what I can do for them. Plus, it’s harder to steal a car with no steering wheel.”

Clemons talks about cars the way some people talk about baseball. He doesn’t just discuss them — he obsesses over them. The design, the engineering specs, the statistics. One minute he speaks romantically and philosophically about a car — the next, he’s disdainful of some design characteristic he thinks was an unfortunate miss. He’s a car analyst, and his niche area of expertise is the Toyota Celica.

He currently owns a 2001 Toyota Celica GTS and a 1977 Toyota Celica GT Liftback. He smiles. “It’s the first and last generation Celica. I call them the Alpha and Omega.”

Cars helped cement a special bond with his grandfather, Harding alumnus Kenneth Noland of Newport News, Virginia, whom he calls Grand Ken. “If I hadn’t fallen in love with cars, I don’t think we would have the relationship that we have today. As it is, he’s one of the few people in my family I can actually talk about more complex car issues with.”

“Grand Ken acquired an emerald green ’65 Mustang GT Fastback when I was a kid. He bought it for $2,100 bucks with no doors, not running. He intended to flip it, but once he heard the engine run, he decided to completely restore it. It’s in beautiful condition now.” The Mustang has some multi-generational family history. “My Dad went to New Jersey to ask my mom to marry him. On that same trip, he and Grand Ken went to a parts swap to buy these rare GT wheels for the Mustang.” Clemons and Grand Ken worked on cars together as he grew up. 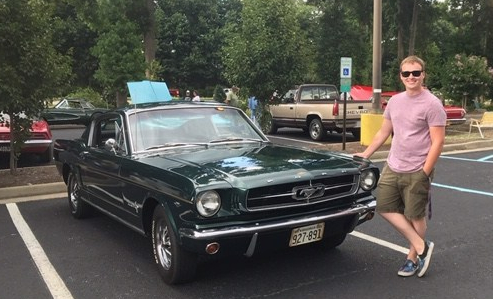 Clemons and the 1965 Mustang Fastback belonging to his grandfather, Kenneth Noland.

“When I was in high school, I’d help him flip cars. I guess one thing I learned from Grand Ken is there are things you can be really passionate about and really good at. That you can combine work and hobby. Over the years, Grand Ken has bought and sold many cars. He can do tons of work himself, and he has a guy who helps with what he can’t do.”

Clemons’ current ride, a 2001 Toyota Celica GTS 6-speed, was his first car. It looks nothing like it did when they bought it — and of course, there’s the magenta steering wheel you can frequently find beside his desk when he’s in class. 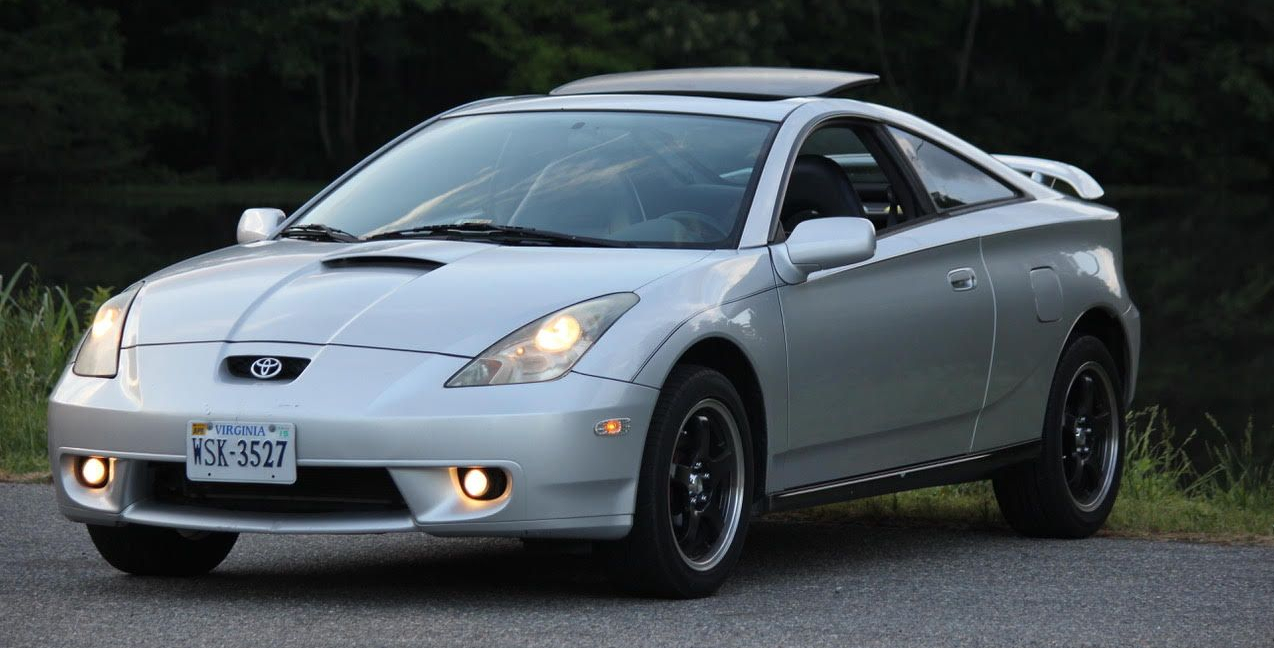 The before and after of Clemons’s 2001 Toyota Celica GTS. 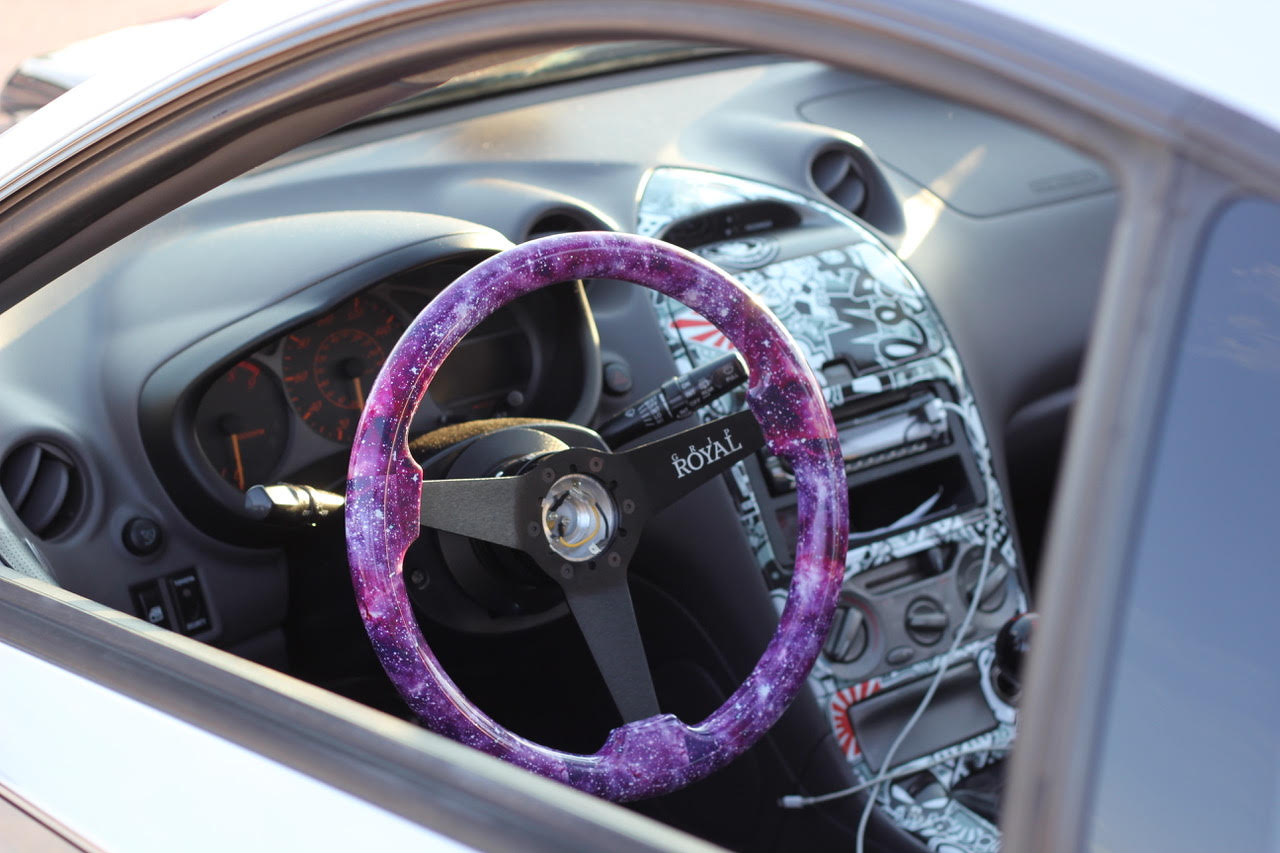 With so much effort into tuning his car, is Clemons one of those car owners who park diagonally, hogging multiple spaces in the Walmart parking lot? He says absolutely not. He does have favored parking spots on campus, which we discussed at length, but we’re not telling.

“Sure, I’m pretty careful where I park it, but my car’s FIA (Federation Internationale de l’Automobile) approved, and after June 2 it will be pretty much a full-time race car.” So maybe it makes sense that he’s not quite so worried about a potential ding in the door.

He has a goal to begin racing in the GridLife Street Modified class. “This class is for vehicles that are street driven. If you go up to the next tier, the vehicles don’t have to be street legal. Gridlife racing is all across the East Coast — events in Richmond are held at Dominion Speedway. I’m part of an unofficial racing team of friends I’d like to see compete eventually.” 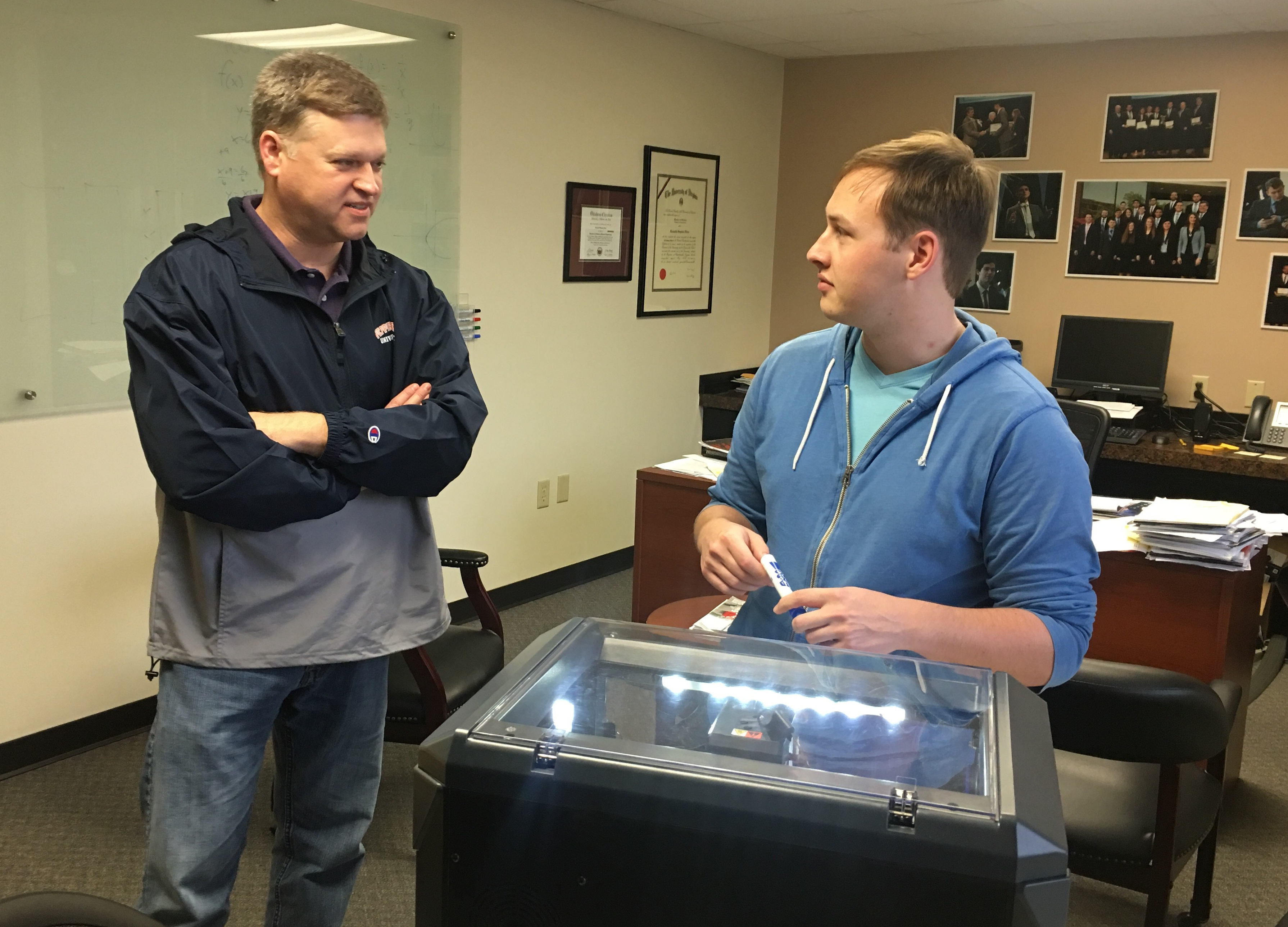 Dr. Mark Farley and Clemons discuss the parts that just arrived for some repair work on one of the Farley family vehicles.

While at Harding, however, he concentrates on whatever his local customer wants. “I’ll fix your hybrid, build you a race car, or anything I can do for you without a lift. Just this weekend I replaced a side mirror and straightened a door out for someone who had hit a deer. I do stereos and speakers. I’m doing a full build on a friend’s car: exhaust, wheels, suspension, front bumper, interior.”

“Tuning” is car speak for the modification of a vehicle for appearance or performance. “In the tuner world, you can either do show modifications or track modifications. My car is a track car. The modifications I’m doing to my friend’s car are purely aesthetic upgrades.”

So how does he eventually want to make his hobby pay? “My goal is to someday be able to combine my mechanical understanding with my business degree and perhaps eventually be a project manager for a car company. I think being able to talk technical to engineers as well as understanding the business implications would be a good combination. My absolute dream job would be to be on a product development team rolling out the next Toyota Celica.” 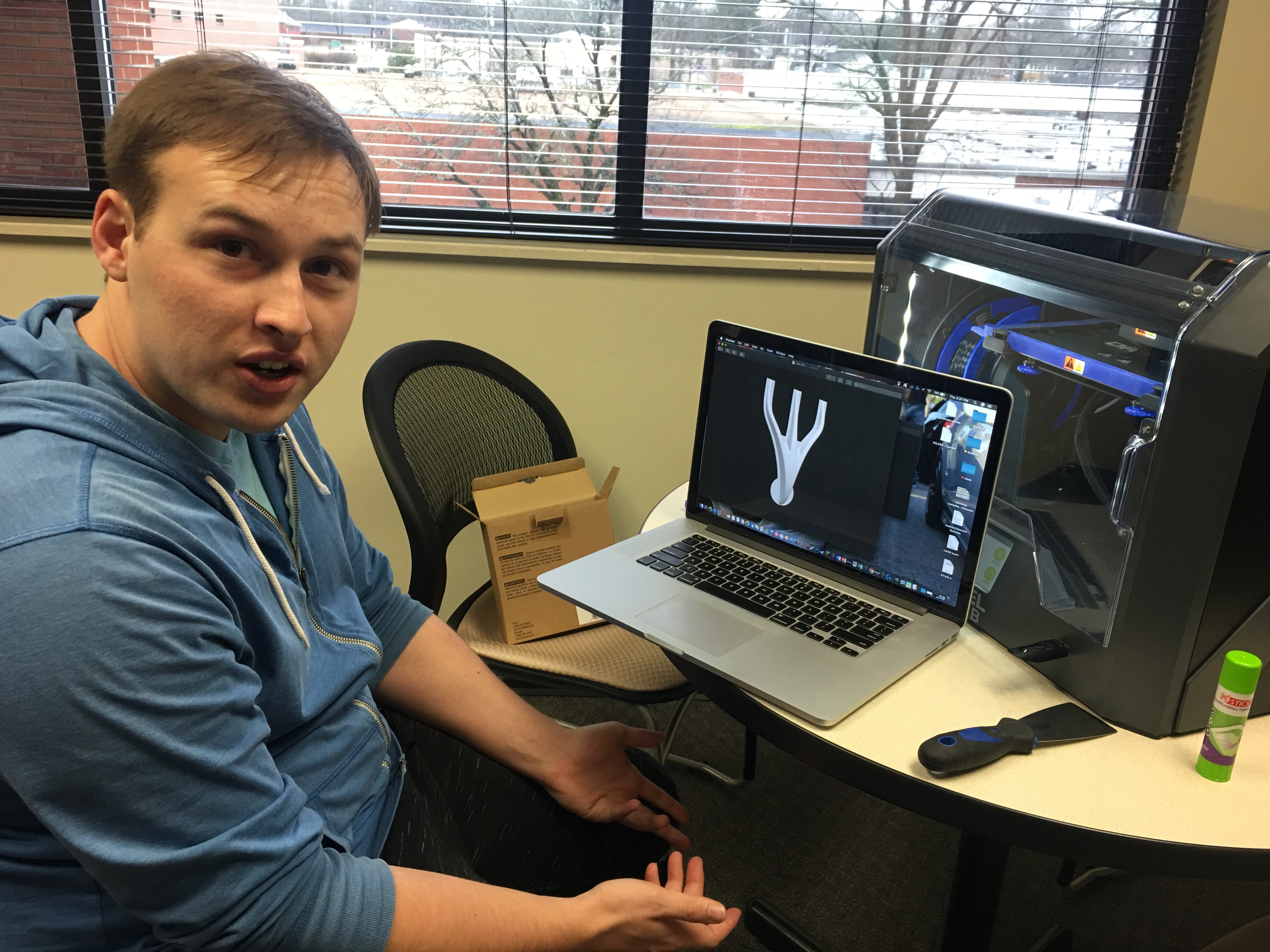 Clemons uses the Waldron Center’s 3D printer to make a delta-wing vortex generator for his car.

Clemons knows the dream job is some distance in the future and would consider any opportunity to get his foot in the door. The holy grail may be Toyota, but “Subaru’s headquarters is in Michigan, and Toyota owns 25 percent of Subaru, so there’s a connection there.” Or there might be opportunities at Ford, of course, in Dearborn, Michigan.

Clemons’ car interest will follow him everywhere, much as the steering wheel does these days. He returns to his automotive Zen vibe. “Cars are about much more than just getting from A to B. They’re about the journey.”

If you need repair or performance upgrade work done on your vehicle, you may contact Joshua Clemons at jclemons1@harding.edu.

If you are a student who is running a business while in school, the Waldron Center would like to hear from you too. Contact Patti Summers at psummers@harding.edu.